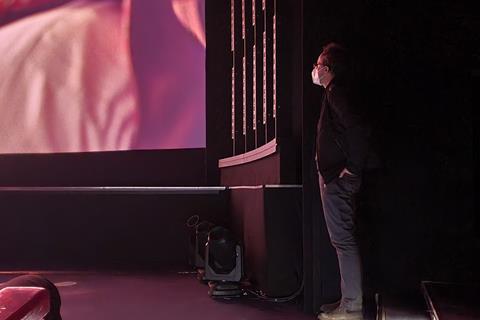 The 72nd Berlinale got underway after an inauspicious start on Thursday evening (10) as “technical problems” during the opening night screening of Francois Ozon’s Peter von Kant caused the film to cut out after about 30 minutes.

During a scene in which the eponymous character is shooting a film himself, the screen at the Berlinale Palast venue suddenly went blank.

The audience was left in the dark for roughly 10 minutes, before the film restarted at a different point. It played for another couple of minutes before cutting out again, to groans from the crowd.

Audience members were left unaware of what the issue was or how long it might take to resolve, causing some to leave prematurely. After a total delay of around 15 minutes, the film finally restarted from slightly before its original cut-off point, and then played through to the end.

Following the film, German journalist Hadnet Tesfai – one of the hosts of the pre-screening opening ceremony – returned to the stage to apologise to “the audience, the [film] team and the cast who are here”.

“You will have noticed that we had technical problems,” she said. “We are deeply sorry about the interruption, but I hope that you still had a lot of joy watching the film.”

Artistic director Carlo Chatrian could be seen coming in and out of the auditorium at the side of the stage, both prior to and after the technical issues.

The trio joined Tesfai on the stage after the screening. “Thank you for staying,” quipped Menochet, to laughs from the audience. “We make films together and we watch them together – no matter what.”

The evening had already suffered the absence of Isabelle Adjani, who appears in the film in a supporting role, reportedly due to her coming into close contact with a Covid-positive person.

Around 800 guests attended the opening night ceremony, which due to Covid-19 restrictions is less than half of the normal capacity of the Berlinale Palast venue.

Attendees were required to show a Covid pass, a photographic ID and a ticket to gain entry. The stringently enforced checks meant long queues down Marlene Dietrich Platz, and a delayed start to the show. Guests had been instructed on their tickets to enter through one of two separate ‘Pre-Check’ entrances. With many patrons still stuck outside with the show about to start, this protocol was eventually abandoned and guests were instructed to go through either entrance.

Mask-wearing was properly enforced for all inside the venue except those on stage. Security guards in the queue outside reminded attendees of the requirement.

The technical problems and delayed start meant a late finish to the evening. It had begun with speeches from Germany’s new minister of state for culture and media Claudia Roth as well as Chatrian and Berlinale executive director Mariette Rissenbeek.

Addressing the audience, Chatrian said, “As you can’t hug, I’m going to give Mariette a hug”, before surprising his fellow director by embracing her on stage.

There were also tributes to the festival staff for putting together the event despite the rise in cases of the Omicron variant over winter, and to German healthcare staff, several of whom were in attendance.

Afghan filmmaker Shahrbanoo Sadat also received a round of applause for her presence, having fled her home city of Kabul in August last year following the Taliban’s take-over of the city.