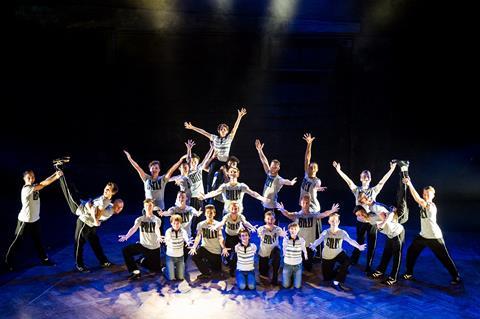 Event Cinema has a new champion. Billy Elliot the Musical - Live has become the burgeoning exhibition sector’s first ever number one at the UK box office.

Billy Elliot also debuted ahead of Doctor Who: The Day of the Doctor which landed with $2.9m (£1.82m) last year.

Due to its huge success, encore screenings have been confirmed to take place in 350 cinemas across the UK on Oct 2-5. The performance saw 25 former and current Billy Elliots come together on stage for a specially choreographed finale [pictured].

Leading the way until Billy Elliot burst onto UK screens, The Equalizer had to settle for second with a $3.07m (£1.89m) bow from its 458 sites.

Sony’s action reboot marked director Antoine Fuqua’s third best-ever UK bow, with Olympus Has Fallen still leading the way at $3.6m (£2.2m) although that did include $1.1m (£652,000) in previews.

King Arthur is currently Fuqua’s best-ever UK performer with $11.5m (£7.1m), a tally that The Equalizer could challenge if it holds well this coming weekend.

Albeit for different audiences, that’s an opening ahead of recent Brit comedy Pride which debuted with $1.2m (£718,778) from 489 sites.

The Last Impresario, Gracie Otto’s documentary about film producer and theatre impresario Michael White, posted a UK opening of $3,300 (£2,031) from its three sites through Dogwoof.

Metrodome’s Soul Boys of the Western World (opens Sept 30), Koch Media’s Life After Beth (opens Oct 1) and Lionsgate’s Draft Day all receive wide releases, while Soda Pictures’ Violette and Peccadillo Pictures’ You and the Night are among the films receiving limited releases.