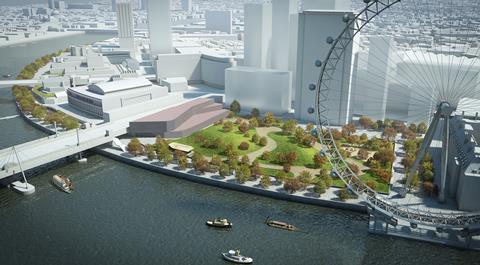 The British Film Institute (BFI) has unveiled plans to open a £130m ($190m) International Centre for Film, TV and the Moving Image by 2022 – which could replace the existing structure on London’s South Bank.

An anonymous benefactor has pledged £87m ($128m) toward the total cost, subject to a tender process that begins today, and while concept art reveals the location of the new centre [see above], an architect has yet to be appointed.

The new centre will include three cinemas (800, 180 and 120 seats); an education and research centre; a major gallery space; and presentations of the BFI National Archive.

It will also become the new home of the BFI London Film Festival, which is based primarily around Leicester Square in central London.

In addition, the centre will include past and present experiments in filmmaking from a giant zoetrope and camera obscura to the latest in holographic and virtual reality storytelling.

The development will include an expansion of the South Bank’s Jubilee Gardens, creating more than 6,500 sqm of additional green space.

British stars including Tom Hiddleston, Helen Mirren and Idris Elba have pledged their support to the development (see below).

The BFI hopes to make up the £43m shortfall through a major fundraising push, ahead of a planned start of construction in 2018.

The move would be many decades in the making. The building operated as the National Film Theatre from 1957, relaunching as the BFI Southbank in 2007 in considerably enlarged premises, taking over space that had been used by the Museum of the Moving Image.

In November 2009, £45m ($66m) was pledged by the Labour government to begin the development of a new centre for the BFI. But the plans were halted when the Conservatives were elected in 2010, who instead announced major cuts to the arts.

The fresh pledge of money has breathed new life into the project.

Amanda Nevill, BFI CEO said: “British film and British filmmakers deserve a home now more than ever, a building that will express our optimism, our confidence and our excitement about Britain’s leading role in the future of film, television and the moving image at home and internationally.

“It will be a place where filmmakers and audiences will come together to be inspired by our creative legacy and to be part of this most fast moving, dynamic and popular art-form.”

Hiddleston, the British star of the Avengers and The Night Manager, said: “I believe this is the most exciting cultural development to happen in the UK for some time. All the major art-forms in Britain quite correctly have national homes except one: film.

“British film - the tradition which has created and produced so much extraordinary talent both in front of and behind the camera - needs a national home, and the BFI is the organisation to build it.

“The new BFI Centre would blow the doors wide open for everyone. Filmmaking is an art, a craft, and it’s also a real job. British directors, British actors, British crews, and British films are famous all over the world. The new development will help to democratise and diversify the pool of talent coming into the industry.”

Mirren, the Oscar-winning star of The Queen, commented: “The proposal for a new centre is a very exciting one and will bring young people and their energies and understanding of the modern world into this amazing form of culture and of self-expression – cinema.”

Elba, the London-born star of Luther and the upcoming Star Trek Beyond, said: “Britain is a great centre of creativity and film is at its heart. If we want to see this continue to flourish, then we have to encourage young people from all backgrounds to think about it as a career, which we aren’t going to do if we don’t shout about it.

“It’s time we had a proper national home worthy of this 21st century art-form, and I’m excited for all of the brilliant opportunities this will bring.”