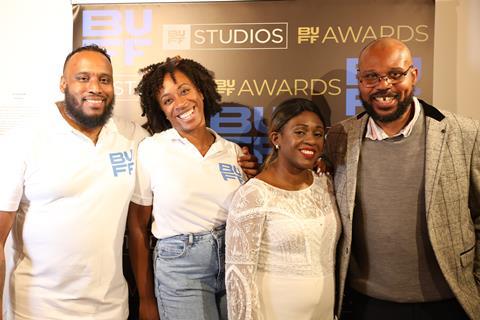 The feature was filmed over a five-year period, and profiles Marvel Opara, the visually impaired mother of British Olympic boxer Joe Joyce.

The line-up features four world premieres, including Isaac Odeniran’s Child Of The Occult, which follows tension within a family between belief in God and the occult, plus 11 UK premieres, such as The Anger from Lebanese filmmaker Marie Surae, about a Muslim girl who escapes from her alcoholic mother to find love and salvation in an older, European man.

BUFF runs from November 26 to December 3, and will for the first time be held at Rich Mix in London’s Shoreditch, having previously taken place at south London cinema Peckhamplex. The BUFF awards is set for December 3, with British-Nigerian filmmaker Obi Emelonye receiving this year’s honorary award, whose credits include Black Mail and The Mirror Boy.

The Sun Rises In The East dir. Tayo Giwa

When We Speak dir. Tas Brooker

The Wife And Her House Husband dir. Marcus Markou*