Saoirse Ronan and Domhnall Gleeson hold on to each other in the first offical still from the period drama. 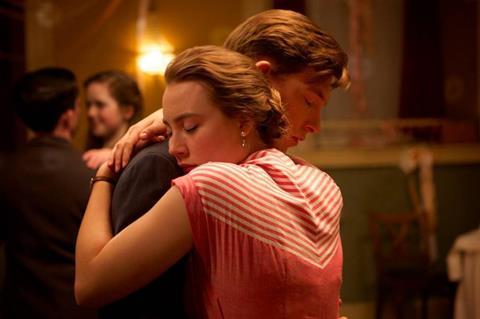 The first image from Brooklyn has been released, showing actors Saoirse Ronan and Domhnall Gleeson in an embrace at a dance.

Shooting has finished in Ireland, after which filming moved in mid-April to Montreal in Canda for a further four weeks.

Set in the early 1950s, Brooklyn is the story of a young woman, Eilis (Ronan) who moves from small town Ireland to Brooklyn, NY where, unlike home, she has the opportunity for work and for a future - and love, in the shape of Italian-American Tony (Emory Cohen).

When a family tragedy brings her back to Ireland, she finds herself absorbed into her old community, but now with eligible Jim (Gleeson) courting her. As she repeatedly postpones her return to America, Eilis finds herself confronting a terrible dilemma - a choice between two men and two countries.

John Crowley, director of Boy A and Closed Circuit, directs an adaptation of Colm Toibin’s bestseller from a script by Nick Hornby, the novelist who wrote the screenplay for An Education. Producers are Finola Dwyer and Amanda Posey.

The script was developed by BBC Films, and the co-producers are Parallel Films in Ireland and Item 7 in Canada.

Hanway Films are handling international sales. Lionsgate will release in the UK and Mongrel in Canada.