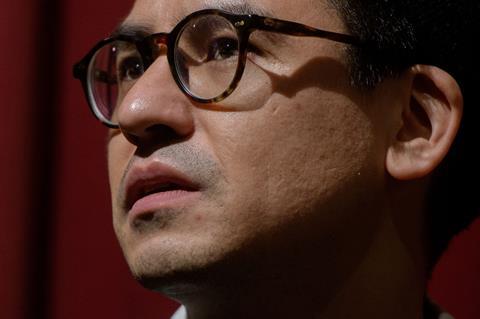 “In the same way I ripped off Fassbinder, I am going to Kieslowski now,” the director joked. (Berlin Alexanderplatz is based on a classic 1929 novel by Alfred Döblin which Rainer Werner Fasssbinder made into a 14 part TV series.)

Kieslowski’s films Blue (1993), White (1994) and Red (1994), which screened consecutively in Venice, Berlin and Cannes, were inspired by the colours of the French flag and took as their themes ‘liberty,’ ‘equality’ and fraternity.’ Qurbani’s trilogy of features will each take a colour of the German flag, which is black, red and gold, and will take as its themes “unity, justice and freedom.”

“I want to make three films about the political situation, the change, the gaps in our society, with each of these films have these three words, unity, justice or freedom as a topic,” the director explained.

Qurbani is again working with screenwriter Martin Behnke (with whom he collaborated on Berlin Alexanderplatz) on the trilogy. He will also be back together with many other regular collaborators, producers Leif Alexis and Jochen Laube, and cinematographer Yoshi Heimrath.

One of the three films in the trilogy, Black (which takes “unity” as its theme) will be a musical. He is working with young musician Max Rieger on the music.

Qurbani said that he embarked on Berlin Alexanderplatz partly because adapting a classic novel was the only way he could get attention for a contemporary German feature film with a black actor in the leading role.

The director had the idea for the film after seeing drugs dealers in a local park. “I was looking at this community of drug dealers. I saw them and I saw how people looked at them - how they were stigmatised by the job they had to do. I thought I want to make a film about them, about one of these guys and his life. (But) living in Germany, to make a film about a black character, it will be ignored, Nobody will watch it. Then it kind of clicked. If I take Berlin Alexanderplatz and Franz Biberkopf [the main character in Berlin Alexanderplatz] would be one of these boys, then it would be very hard to ignore.”

In the film, the Franz Biberkopf character is a migrant from West Africa called Francis and is played by Welket Bungué.

Berlin Alexanderplatz is released in Germany in April.