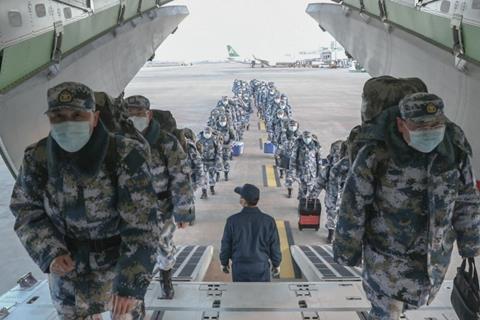 The first group of 150 Navy medics head to Wuhan

The ARTeFACT Entertainment production is in post and produced by Shanghai-based producer Han Yi and travels to China to investigates the alleged outbreak of the pandemic and the nationwide response. Venture capitalist Eric Li of Chengwei Capital is financing the film.

Clarke, who won documentary short Oscars for The Lady In No. 6 and You Don’t Have to Die, embedded himself in a secure hotel in Wuhan near the wet market in China where the virus is said to have first come into contact with humans.

The director and his team on Wuhan – A Season In Hell were initially detained and forcibly quarantined by local authorities. Eventually they gained exclusive access to the stricken city as the crisis escalated, local hospitals were overwhelmed, and 42,000 doctors and nurses across China volunteered to travel to Hubei province to help.

With the help of an infectious disease specialist, Clarke reconstructs events surrounding the alleged birth of the pandemic and includes exclusive interviews with traders at the wet market, local doctors, volunteers, and senior officials.

“This is by far the most challenging film I’ve ever made, shooting a film in a place where the country, the entire society, has taken itself to ‘war,’” said Clarke. “The Wuhan experience has since become a microcosm – an object lesson in how the whole world could, and perhaps should have responded to this terrifying, invisible, mortal threat. This film is about responsibility; it’s the stories of those who stepped up and risked their lives, and the stories of those who could’ve done much more.”

“We sincerely hope that lessons can be learned from the Wuhan experience,” said Yi. “By understanding what happened and bravely dealing with the devastation and pain, we hope that the city of Wuhan will come back stronger in the broken places.”

At time of writing it was not known if the film will premiere at a fall festival.