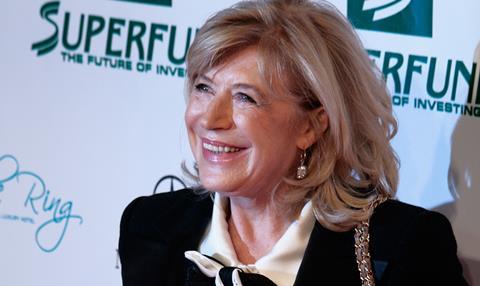 Simply entitled Faithfull, it will follow the singer’s life journey, from being discovered at the age of 17 in 1960s ‘Swinging London’; to her rock ‘n’ roll life with Rolling Stones frontman Mick Jagger; her battle with drugs and alcohol addiction and rebirth as a performer in later life.

Developed in close co-operation with Faithfull, it is set to feature interviews with Jagger, Salman Rushdie, Anselm Kiefer, Nick Cave and Damon Albarn.

It is Bonnaire’s second documentary after My Name Is Sabine, about her severely autistic sister, which premiered in Cannes Directors’ Fortnight in 2007. Paris-based Cinétéve is producing, with the backing of Arte, for a 2017 delivery.

The documentary is among four new titles unveiled by Paris-based MK2 Films on the eve of Cannes.

They include two first features: The Nature Of Time by Karim Moussaoui and Look Up (Guarda In Alto) by Fulvio Risuleo.

Moussaoui won critical acclaim for his 2013 medium-length film The Days Before, following two teenagers whose lives are changed forever when the violence of Algeria’s brutal 1990s civil war arrives in their sleepy Algiers suburb.

“I was completely bowled over by the film, quite literally shaking at the end, and got onto his producer immediately,” says MK2 Films acquisitions and sales chief Juliette Schrameck, who has high hopes for the future careers of both Moussaoui and Risuleo.

Set in contemporary Algeria, The Nature Of Time follows three characters: a newly wealthy property developer, an ambitious neurologist with a dark wartime past, and a young woman, torn between reason and her heart.

Jaber Debzi of Algiers-based Prolégomènes is lead producing with Paris-based Les Films Pelléas (The Heart, In The Courtyard) on board as a co-producer.

The project was developed at the Cannes Résidence du Festival in Paris and is also supported by the Beirut-based Arab Fund for Arts and Culture (AFAC) and the Doha Film Institute (DFI).

Look Up, an adventure film set entirely on the labyrinthine rooftops of Rome, is also a first feature for Risuleo, whose short film Chickenpox (Varicella) won the Discovery Award in Critics’ Week last year.

It is a co-production between Rome-based Revok and French producer Mylène Ollivier, whose production credits include Miniscule: Valley Of The Lost Ants. Schrameck describes it as “a pure adventure film” for both children and adults.

The company is also set to commence sales on Robert Guédiguian’s new film The House By The Sea, a loose adaptation of Anton Chekhov’s The Cherry Orchard transposed to a picturesque villa in a bay near Marseille.

Produced by Paris-based film collective Agat Film & Cie, it is due to start shooting in November.

Cannes titles for the company include Palme d’Or contender Personal Shopper and Un Certain Regard title Harmonium. MK2 was also a co-producer on Xavier Dolan’s Competition title It’s Only The End Of The World although it is not handling international sales.