Chancellor George Osborne was today [29] tub-thumping on behalf of the UK’s creative industries and calling for film and TV producers to help revive the UK economy. 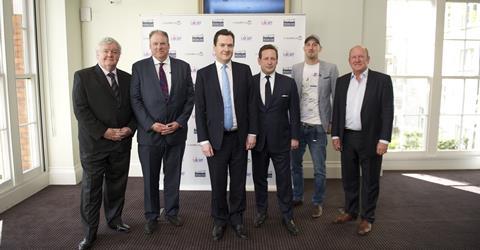 Speaking at the launch of the new “Creative Sector Tax Reliefs” hosted by the British Film Commission at BAFTA, Osborne told a packed audience of industry figures that they were part “of one of the most successful, exportable industries we have in a fiercely competitive global race.”

“It’s a massively important industry for the UK going forward,” the Chancellor stated of the creative industries. He suggested that the sector generated £36 billion a year to the British economy and employs 1.5 million people. Osborne also claimed that “one pound out of every ten” that the UK generates through exports is generated through the sector.

As was revealed, a year after they were first announced, the new tax reliefs for high end TV drama and animation are already in place. The reliefs have received EU State Aid approval and the The British Film Institute (BFI) is already issuing “letters of comfort” to UK producers aiming to use the new reliefs. (It’s likely to be August before the full legislation is in place and claims for tax relief can be submitted to HMRC.)

Osborne called the new tax reliefs (which follow on from the UK Film Tax Credit in 2006) as among “the most generous tax credits now available in the world.”

“For me, there were two moments of epiphany,” the Chancellor stated of just why he has chosen to throw his weight behind the new tax breaks. “The first was when I met Oli (Hyatt, the Chair of lobbying body UK Animation)…he made such a passionate case for why British animation was the best in the world,” Osborne stated.

Osborne’s second moment of epiphany came when he watched a UK-set TV drama (he didn’t reveal which) and realised from the end credits that it had been shot in Hungary.

“It struck me as crazy that we weren’t able to do something to change that.”

Osborne pointed to the strength of the creative sector throughout the UK - and not just in London and the south-east. “We need to see other parts of our country becoming more competitive and attracting private sector jobs. What’s fantastic about your industry is that so much of it happens throughout the country whether it’s animation in Bristol, video games in Dundee or, of course, (HBO drama) The Game Of Thrones in Northern Ireland.”

Ed Vaizey MP, Minister for Culture, Communications and Creative Industries, speaking after The Chancellor, pointed out that 1000 films have now taken advantage of the film tax credit which has been worth £800 million over the last five years.

“Our Chancellor knows a good deal when he sees it…and we are it!” quipped Amanda Nevill, CEO of the BFI of the Government’s backing for tax breaks for the creative sector.