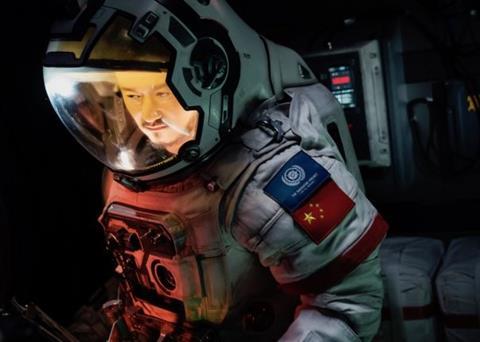 UPDATE (Feb 19): The Wandering Earth held on to top spot at the international and global box office with ease thanks to an estimated $96.9m session, while Alita: Battle Angel leap-frogged DreamWorks Animation’s How To Train Your Dragon: The Hidden World with $56.2m to ensure it finished top of the Hollywood pile.

The progress of Frant Gwo’s Chinese sci-fi The Wandering Earth since last weekend’s Chinese New Year holidays once again demonstrates the might of local box office and the kind of numbers Hollywood seldom achieve.

The film, which recounts an outlandish mission by astronauts to save humanity, now stands at $606.9m and $609.3m, respectively.

Alita: Battle Angel flew the flag for Hollywood as it overtook How To Train Your Dragon: The Hidden World in a solid $56.8m session powered by mostly European number one debuts as it surged to a $94.9m international running total from 85 markets. Combined with the $37m number one North American debut, the early running total for the animation about a female cyborg on an identity quest directed by Robert Rodriguez stands at $131.9m.

Russia led the way with $6.9m for number one. Next was France on $5.8m for second place heading into the school holidays, then Mexico on $4.1m for number one, Australia on $2.97m for number one, and Germany on $2.85m for number two. Fox International scored its fifth highest debut of all time in Thailand with a $2.5m number one debut, and there were more table-topping bows in Spain and Brazil on $1.99m and $1.6m, respectively.

Vietnam generated another impressive debut in a recent streak that started over the Tet lunar holiday, as Alita earned $1.5m for number two. Italy produced $1.2m for fourth place. South Korea delivered the best hold, adding $2.5m at number five for $14.7m after two, while the UK produced $1.8m at number four for $7.4m after two. Alita opens in China this week and co-writer and producer James Cameron will be on the ground to drum up support for what is expected to be a strong debut.

DreamWorks Animation’s How To Train Your Dragon: The Hidden World brought in $21.9m for a solid $175m from the relatively early stages of release, with the film set to debut in North America this week (22). Poland and Ecuador delivered franchise-best number one debuts on $1.9m and $632,000, respectively.

France led holdover business on $3.8m for fourth place and a $12.6m tally after two sessions, followed by Germany on $3.3m for number one and $11.5m after two. In the third weekend The Hidden World generated $2.2m in the UK for number three and $14.9m, and $1.6m in Mexico for number three and $17.4m. Italy has produced $7.6m after three weekends, Brazil $13.7m after five, and South Korea $9.9m after three. The family animation arrives in Russia, Spain and Japan this week.

Horror sequel Happy Death Day 2U ventured into its first 41 territories and delivered $11.6m day-and-date with the number five North American debut. Highlights included a $2.2m number four debut in South Korea and a $973,000 number nine release in France, as well as $949,000 for number four in Germany, and $941,000 for number six in the UK. Also of note, Universal’s biggest horror opening day admissionis total of all time in Peru on $448,000 for number two, and $864,000 for number two in fast-rising Indonesia. The 2017 original finished on $69.8m.

Mary Queen Of Scots stands at $23.4m following a $900,000 weekend haul in 29. The historical drama starring Saoirse Ronan and Margot Robbie has reached $10.9m in the UK after five weekends and ranks fifth.

The Lego Movie 2: The Second Part brought in $12.1m from 69 markets to raise the early tally to $34.6m as the worldwide score climbed to $103.4m. The UK produced the comedy’s biggest result of the session, staying top on $3.2m for $9.6m after two weekends. The 2014 original finished on $56.9m, a result that looks out of reach for the sequel and was easily the original’s best international result when all was said and done. However Lego Movie 2’s UK gross is performing well against 2017’s The LEGO Ninjago Movie, which finished up on $13.1m in the territory.

Ralph Breaks The Internet crossed $300m internationally and $500m worldwide as $7m from 28 material territories propelled the tally to $306.8m, and $7.9m worldwide elevated the running total to $505.4m. The animation sequel opened well in France on $4m including previews heading into school holidays. China is the lead market on $39m, followed by Japan on $34.7m, the UK on $23m, Mexico on $17.4m, and Brazil on $17m.

The comedy Instant Family starring Rose Byrne and Mark Wahlberg grossed $4.4m from 21 markets to stand at $37.3m, powered by a $3.1m number two debut in the UK. The film has grossed $8.9m after six sessions in Australia, $2.7m after three in Germany, and $1.3m after three in Netherlands.

This was a notable weekend for four local-language films, which collectively earned $9m through SPRI. Alexey Nuzhnys Russian comedy Loudspeaker (Gromkaya Svyaz) opened in second place on $3.3m in Russia and is a remake of the Italian box office hit Perfect Strangers, in which dinner party friends share their texts and calls to prove they have no secrets.