The streaming giant is in negotiations to acquire The Other Side Of The Wind, veteran producer Frank Marshall told convention attendees on Monday. 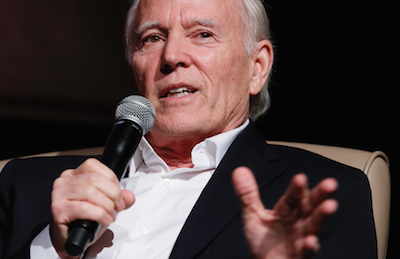 Netflix would be the ideal home for Welles’ unfinished film, said the producer, who hoped it would debut by the end of the year.

He reminded attendees The Other Side Of The Wind stars John Huston as a director on the last night of his life as seen through the eyes of the paparazzi. The film shot between 1970 and 1976. Welles died in 1985.

Marshall weighed in on the Screening Room debate and reminisced about a career that has seen him rack up credits for the Indiana Jones and Jason Bourne franchises, Poltergeist, Jurassic World and the upcoming The BFG, Jason Bourne, Assassin’s Creed and Sully, among many others.

He expressed confidence in the return of Harrison Ford in the upcoming fifth Indiana Jones episode, noting he was the only man for the role.

Plus, he said, the actor delivered a confident return to duty as Han Solo in Star Wars: Episode VII — The Force Awakens, a film produced by his wife and Lucasfilms chief Kathy Kennedy.

Marshall also revealed he was preparing to direct again – a rare feature of his career – and was lining up The Longest Night, based on a Baltic Sea coastal rescue story.