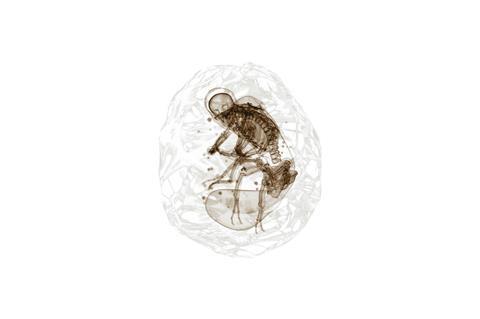 The climate crisis, wealth inequality, and the evolution of humanity inform Sundance Film Festival selections in the New Frontier section announced on Thursday (12).

Experimental media working across VR, AR, mixed reality (MR) and AI examine these and other topics. Azibuye - The Occupation (South Africa), a selection in VR Cinema by Dylan Valley, Caitlin Robinson and Stephen Abbott, follows a Johannesburg protest over land ownership; mixed-reality exhibit Solastalgia (France) by Antoine Viviani and Pierre-Alain Giraud imagines humans as holograms on the surface of an uninhabitable planet; and Hominidae (USA, pictured) from lead artist Brian Andrews in VR Cinema is a survival story sets against a backdrop of X-ray imagery and anatomical reimagination.

The 2020 edition of New Frontier returns to two dedicated venue spaces: New Frontier at The Ray and New Frontier Central. New Frontier Central also houses the Biodigital Theatre, a presentation space that will feature a rotating schedule of large-scale VR performances and a feature-length livestream game telecast. The section is also represented by a satellite project at festival headquarters, and an AR work to be discovered in locations around Park City.

Shari Frilot, New Frontier chief curator, said: “Powerful technologies now enable experiences that capture, replicate, and replace “the real.” But it is even more special when the human touch converges with technology, we are provoked to reach beyond what we know to be real and enter into unfamiliar terrain. This transcendence can shift who we believe ourselves to be, where our bodies begin and end, what we are to each other, and who we are ultimately capable of being. The 2020 edition of New Frontier stares down the fear of losing our neighbourhoods, and losing ourselves, and reminds us that the future is now – and because the future is now, the future can be ours.”

New Frontier selection appears below. All synopses are provided by the festival and may have been modified slightly. Sundance Film Festival runs from January 23-February 2, 2020.

BLKNWS (USA)
Dir: Kahlil Joseph
An ongoing art project that blurs the lines between art, journalism, entrepreneurship, and cultural critique, appropriating the newsreel format as an opportunity to reimagine the contemporary cinematic experience, mixing an element of seriousness with a light-hearted twist on what news can be.
Cast: Helen Molesworth, Alzo Slade, Amandla Stenberg, Trifari Williams

Infinitely Yours (USA)
Dir: Miwa Matreyek
A live performance at the intersection of cinema and theatre exploring what it means to be living in the Anthropocene and the time of climate crisis. A kaleidoscopic meditation that is an emotionally impactful and embodied illustration of news headlines we see every day.

małni – towards the ocean, towards the shore (USA)
Dir: Sky Hopinka
An experimental look at the origin of the death myth of the Chinookan people in the Pacific Northwest, following two people as they navigate their own relationships to the spirit world and a place in between life and death.
Cast: Jordan Mercier, Sweetwater Sahme

Sandlines, The Story Of History (Iraq)
Dir: Francis Alÿs
The children of a mountain village near Mosul re-enact a century of Iraqi history, from the secret Sykes-Picot agreement in 1916 to the realm of terror imposed by the Islamic State in 2016. The children revisit their past to understand their present.

ANIMALIA SUM (Germany/Brazil/Iceland)
Lead Artists: Bianca Kennedy, Felix Kraus
I am animals. I eat animals. A duality explored in a virtual reality experience in which insects will be the future’s main food supply.

Anti-Gone (USA)
Lead Artist: Theo Triantafyllidis
In a post-climate change world, environmental catastrophe has become normalised. Cities are sunken, yet the vestiges of late-capitalist culture live on, clinging like barnacles to the ruins of civilisation. Spyda and Lynxa are a couple navigating this world, gliding frictionlessly from shopping to movies to psychedelic drugs.
Cast: Lindsey Normington, Zana Gankhuyag, Matthew Doyl

The Book Of Distance (Canada)
Lead Artist: Randall Okita
In 1935, Yonezo Okita left his home in Hiroshima, Japan, for Canada. Then war and racism changed everything. Three generations later his grandson leads us on an interactive pilgrimage through an emotional geography of immigration and family to recover what was lost.

Breathe (Sweden/Canada/USA)
Lead Artist: Diego Galafassi
A mixed-reality application that uses body movement and breathing to immerse participants in the story of air. Recast the ordinary experience of breathing as an immediate, direct link to a complex living world. We are alive to a planet that is alive to us.

Chomsky vs. Chomsky: First Encounter (Canada/Germany)
Lead Artist: Sandra Rodriguez
A prologue to a timely conversation on AI’s biggest promises and pitfalls. Lured by the possibility of emulating one of today’s most famous minds, we meet and engage with CHOMSKY_AI, an entity under construction, evolving from the arsenal of digital traces professor Noam Chomsky has left behind.
Cast: Sandra Rodriguez, Michael Burk, Cindy Bishop, Johannes Helberger, Moov.AI

Living Distance (China/USA)
Lead Artist: Xin Liu
A fantasy and a mission, in which a wisdom tooth is sent to outer space and back down to Earth again. Carried by a crystalline robotic sculpture called EBIFA, the tooth becomes a newborn entity in outer space and tells the story of a person in this universe.

My Trip (UK)
Lead Artist: Bjarne Melgaard
Simulating the experience of a DMT trip, this work draws on new psychedelia, black metal music and internet paranoia to question existential concerns such as procreation and overpopulation. A virtual retrospective, travel with characters such as Octo and Lightbulb Man through the dark web to unknown realms.

Persuasion Machines (USA)
Lead Artists: Karim Amer, Guvenc Ozel
How are your likes, shares, selfies, and devices being used against you? By making the invisible world of data visible, this experience will show you how your digital footprint is shaping your reality.

Spaced Out (France)
Lead Artist: Pyaré
An underwater VR experience transports you aboard a voyage from the Earth to the moon, as well as within, led by the audio conversations of the Apollo 11 mission. Using special underwater VR goggles and a snorkel, the experience becomes a space simulation immersing all of the senses.

Still Here (USA)
Lead Artists: Zahra Rasool, Sarah Springer
An immersive, multimedia installation exploring incarceration, erasure and gentrification through the lens of one woman who returns to Harlem after 15 years in prison. The use of interactive VR and AR technologies brings to life this heartfelt story about the reclaiming of space and identity in a changing black community.
Cast: LeAsha Julius, Keith Buxton, Marion Green, James Brown-Orleans, Jeorge Watson, Crystal Arnette

After The Fallout (Switzerland/USA)
Lead Artists: Sam Wolson, Dominic Nahr
In March 2011, an earthquake caused a tsunami and a meltdown at the Daiichi nuclear power plant. The devastating consequences filled the communities in Fukushima with fear of the intangible and split Japan in a distinct before and after.

Azibuye - The Occupation (South Africa)
Lead Artists: Dylan Valley, Caitlin Robinson, Stephen Abbott
When Masello and Evan, two homeless black artist/activists, break into an abandoned mansion in an affluent part of Johannesburg, they proclaim their occupation to be an artistic and political act in defiance of inequalities in land ownership in South Africa.
Cast: Masello Motana, Evan Abrahamse

Bembé (Cuba)
Lead Artists: Marcos Louit, Patricia Diaz
Bembé is a Cuban tradition that encompasses elements of both Christianity and the African Yoruba, where the souls of dead slaves come to Earth and family, friends, and neighbours take part in a celebration lasting up to seven days.
Cast: Ernesto Collinet, Kalina Collinet, Katyleidy Collinet

Go (Switzerland)
Lead Artists: Sandro Zollinger, Roman Vital, Klaus Merz
Searching for stability in his life, Peter Thaler sets out on a hike in the Swiss mountains, from which he will never return. An unprecedented symbiosis of literature and virtual reality, telling a story of everyday and final farewells, and opening the door to eternity a tiny crack.
Cast: Klaus Merz, Niramy Pathmanathan, Robert Vital, Regula Stüssi

Hominidae (USA)
Lead Artist: Brian Andrews
Against a landscape of X-ray imagery and wild anatomical reimagination, a mother and her children struggle for survival. This experience follows an Arachnid Hominid, an intelligent creature with human and spider physiology, from the birth of her children to her premature death in the teeth of her prey.
Cast: Phyllis Griffin, Luis Mora, Emily Weems, Kidjie Boyer, Austin Daly, Oliver Angu

tx-reverse 360° (Austria/Germany)
Lead Artists: Martin Reinhart, Virgil Widrich
What is behind the cinema screen? What if the auditorium dissolves and with it the familiar laws of cinema itself? As reality and cinema collide, viewers are drawn into a vortex where the familiar order of space and time seems to be suspended.

E-Ticket (Hong Kong/USA)
Dir: Simon Liu
A frantic (re)cataloguing of a personal archive and 16,000 splices in the making. 35mm frames are obsessively rearranged in evolving-disorienting patterns, as a Dante’s Inferno for the streaming age emerges, illustrating freedom of movement for the modern cloud.

Guisado On Sunset (USA)
Dir: Terence Nance
Missed connection regret at that one late-night spot – the kind you keep playing back in your head but not quite ever remembering right, until it starts to look like something else.

How Did We Get Here? (USA)
Dir: Michelle Miles
A visual exploration of progressive atrophy. A study in how microscopic changes can go unnoticed, but amass over time. Even as these changes become drastic, we sometimes fail to realise anything has happened at all.

Meridian (USA/Italy)
Dir: Calum Walter
Footage transmitted by the last unit in a fleet of autonomous machines sent to deliver an emergency vaccine. The film follows the machine before its disappearance, tracing a path that seems to stray further and further from its objective.

Pattaki (Cuba)
Dir: Everlane Moraes
In the dense night, when the moon rises, those who live in a monotonous daily life without water are hypnotised by the powers of Yemaya, the goddess of the sea.