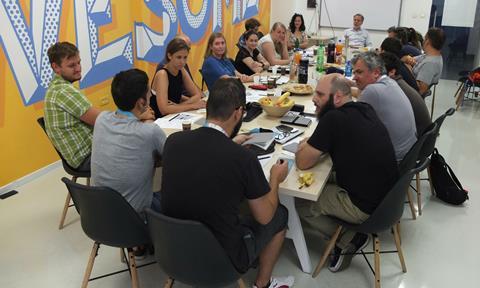 The year-long MIDPOINT TV script development programme concluded at Sarajevo Film Festival today (Aug 16) with the presentation of its awards.

The Midnight Shift, a series from Cyprus by writers Harry Ayiotis and Frixos Masouras, and writer-director-producer Andreas Kyriacou, won the event’s top prize, the HBO Europe award worth $4000.

The series follows a small-time criminal who takes on a midnight shift as a taxi driver. After starting the job, he soon realises that he is cursed to be a modern version of the ancient Greek mythical figure of the boatman; transporting the dead from this world to the next by helping them with their unfinished business.

Subsequently, he connects with a young journalist and the pair partner to uncover a financial political scandal, gathering information from both the dead and the living.

A total of seven projects participated in the MIDPOINT programme, which kicked off in November 2016 with a residential workshop in Slovakia. A second workshop took place in the Czech Republic, in collaboration with Finale Plzen film festival, before the final session was held this week in Sarajevo [pictured].

In Sarajevo, the projects were introduced to the attending CineLink network of international industry professionals, and each project held a pitch with broadcasters, commissioning editors, and industry guests in general.

“HBO Europe Original Production is once again happy to co-operate with the MIDPOINT TV Launch programme. MIDPOINT continues to find and nurture amazing TV writing and producing talent, and we are delighted to be able to support the winning project The Midnight Shift.”

“It is a highly innovative concept – both commercial and deeply personal to the creators – professionally executed at every stage from concept to script to industry presentation; a great story told with a distinctive voice and a big heart.”

A further award, the C21 Media Award, was presented to Vasilis Chrysanthopoulos, who was participating at MIDPOINT as the producer of 10 Bullets, a series based in Athens about financial inequality and social instability.