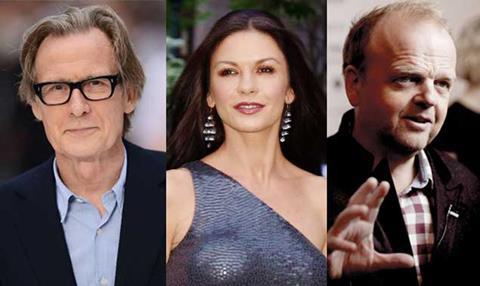 The cast of a long-rumoured film based on classic British comedy series Dad’s Army has been revealed and Universal Pictures International has acquired worldwide rights.

Toby Jones, best known for roles in The Hunger Games and Harry Potter franchises, will take the leading role of Captain Mainwaring, a stiff-upper-lipped veteran who oversees the Home Guard in a small English village toward the end of the Second World War.

His softly-spoken right-hand man, Wilson, will be played by Bill Nighy, known for his roles in The Best Exotic Marigold Hotel and Love Actually.

Both were previously rumoured to be attached to the project, an adaptation of a BBC comedy series than ran from 1968-77, but Catherine Zeta Jones is newly attached to the film as journalist Rose Winters.

Danny Mays will take on the role of Walker and Bill Paterson will play Fraser while the supporting cast also includes Sarah Lancashire , Alison Steadman, Mark Gatiss and Annette Crosbie.

Oliver Parker, director of comedy features including Johnny English Reborn, St Trinian’s and The Importance of Being Earnest, will direct the feature.

Shooting commences in October entirely on location in Yorkshire.

Set in 1944 as the Second World War reaches its climax, the Allies are poised to invade France and finally defeat the German army.  But in Walmington-on-Sea morale amongst the Home Guard, led by Captain Mainwaring, is low.

So their new mission, to patrol the Dover army base, is a great chance to revive spirits and reputation - until glamorous journalist Rose Winters arrives to write about their exploits.

MI5 then discover a radio signal sent direct to Berlin from Walmington-on-Sea, sparking rumours of a spy and - with the outcome of the war suddenly at stake - it falls to the veteran servicemen to step up.

The film was packaged by Wiggin EP and is backed by Screen Yorkshire through the Yorkshire Content Fund.

Milne, founder of British Film Company, is also executive chairman of Molinare TV & Film, which will undertake all post-production on the feature.