Veteran broadcaster reflected on more than 60 years in television and the value of the BBC. 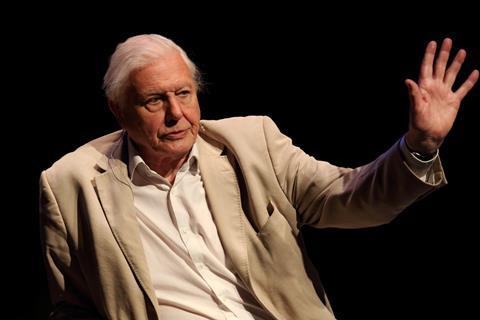 Sir David Attenborough has spoken out about the value of the BBC as part of a wide-ranging conversation at Sheffield Doc/Fest, during which he reflected on his six decades in broadcasting.

“Of all the television organisations in the world, it is the BBC than can say we ought to cover as wide a spectrum of human interests as we can. We will recognise that some parts of the spectrum will only get 1 million [viewers] and other parts will get 5 million. But we will measure our success by the width of that spectrum. Nobody else can do that in the world. The BBC can.”

Attenborough, who turned 90 last month, agreed there was still more that could be done.

“There are still a lot of subjects which are waiting there to be dealt with which are not being dealt with,” said Attenborough, whose long career as a documentary maker was punctuated by a stint as controller of then fledgling BBC2 from 1965-1973.

“It’s very easy for me to take a high and mighty line about how it was at the BBC but the fact is that when BBC2 started, I had total freedom,” he recalled. “Nobody came to me and said you’ve only got half a million. Only a tiny part of the country could see it. So the viewing figures meant nothing to me. You had the liberty to fail.”

Attenborough added: “The BBC has this four networks. Four networks! Nobody else in the world has that. If the function of those editorial policies of those four networks are absolutely clear and the audience knew how to steer their way through it, the world is yours.”

The beloved broadcaster was greeted with thunderous applause and a standing ovation by the 1,000-strong audience at Sheffield’s Crucible Theatre, where BBC One controller Charlotte Moore conducted the on stage conversation.

Going back to his start in the industry, Attenborough said: “I got a job in television without ever having seen a television. I was working in publishing, doing a very boring job as a science editor, when I applied for radio and got turned down flat. A fortnight later, I got a letter about this new thing called television and could I be persuaded to join. I thought I might as well.”

After a stint as a producer and studio director (“which gives you a megalomaniac view of life”), Attenborough was asked to front natural history programme Zoo Quest after regular presenter Jack Lester fell ill.

“If your career is in television and someone said to you: “There’s a new network, it’s only been on air 11 months, it’s going to need a complete change of scheduling policy, there’s 12 million quid, go and make some programmes for it,” what would you do? If you’re in television it’s a dream ticket.”

Attenborough recalled being able to break new ground in his new role. “There was only one network and there were a lot of an awful big subjects that nobody had tackled,” he said. “We had heads of department – sport, comedy, drama, light entertainment, music – and I had conversations with every one of them and said what is it in your area of sport that you want covering. They said: ‘Are you crazy? Lots of stuff. Rugby league, professional tennis, snooker, we did all these things for new.

“Even more fundamental, it was extraordinary in 1964 there was no documentary series lasting more than 30 minutes. When I said we’re going to start 50 minute or one hour documentaries people said people won’t stay that long. Okay, watch!

“We introduced all kinds of new documentary strands, which were an hour long and things like Civilisation and The Ascent of Man.”

Asked by Moore if it was important for the BBC to tackle difficult subjects, Attenborough said: “Yes, and we did. I was getting fed up with this balancing everything all the time. Of course, you have to be balanced, particularly if you’re a monopoly.

“But I wanted to take an extreme line on things, to take an unpopular line on things and make a film say in favour of fox hunting, which we did. We called it One Pair Of Eyes, which was a good title because what we did was find interesting people with very firm opinions on certain subjects and gave them a crew to make a film to explain what they said what they did.

“You were headed for trouble but if you used a title like One Pair Of Eyes, the audience knew what to expect, and that was fair.”

Return to the wild

In 1972, after a tenure that included airing the Moon landings, bringing comedians Peter Cooke and Dudley Moore to the screen and introducing colour television to the UK with landmark series such as Civilisation, Attenborough stepped down to return to filmmaking.

Not long after, he began work on his most ambitious series to date, Life On Earth. “I had been in the administration for eight years and did yearn to go back and make films again,” the naturalist recalled.

“I knew, having got Civilisation established, there was the most powerful, riveting, beautiful series you could possibly make would be about the history of life. I was terrified someone else would think of this before me. I knew I had to go out and make that series.”

The series, which aired in 1979, remains the production of which he is most proud. “Nobody had done a 13-parter on natural history covering the whole thing from amoeba right through to man, from pre-history 500 million years ago to today. It set a pattern for natural history programmes that I’m quite proud of,” he said.

Working with the BBC’s Natural History Unit, Attenborough went on to make landmark series including Life and Planet Earth, of which a sequel is in production now for the latter and will air later this year.

Asked about Planet Earth II, Attenborough said of the six-part series: “It’s divided by geographical areas. The Earth is a big place and life is infinitely varied. It’s now nearly 40 years since Life On Earth. Perhaps you could look at a peacock for a second time after 40 years.”

With no reason to retire, Attenborough added: “I can’t believe that I’m as old as I am and people are still saying would you like to make programmes. It would be ludicrous not do so. I’m having a ball. It’s the best thing you can possibly do.

“We’re in the paradise at the moment with natural history filmmaking. There is nothing on this planet now that we cannot see on film. We can get cameras to the top of Everest to the bottom of the deep blue sea. We can speed things up or slow things down, show bioluminescence at the bottom of the sea.

“If we get tired of doing it or if we are so blasé to take it for granted then that’s our fault because, by golly, the world out there is a wonderful world.”