Netflix is hoping to produce a scripted series set in the Middle East as the streaming giant gears up to launch across the region next year, said content chief Ted Sarandos in a live link-up to the Dubai Film Market (DFM). 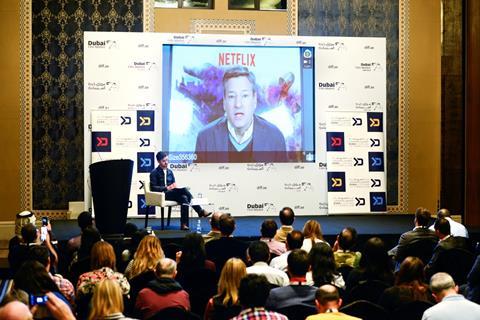 Sarandos confirmed Netflix would launch across the Middle East next year – a region of 370 million people and high levels of mobile and broadband penetration. “We’re enthusiastic to find great storytellers in the region,” he continued. The SVOD service has already started talks with local content producers and is working with DIFF and DFM to meet local talent.

Netflix will also acquire – not just commission and produce – Arabic-language content and is close to signing a deal for a high-profile local film.

Sarandos also said the streaming giant would buy out worldwide rights to the local-language content it acquires and produces. “We’re working with local producers, actors and writers to tell stories not just to the region, but to the world, and that is the biggest opportunity beyond just licensing local content for the region,” he said.

At launch, the Middle East service will resemble Netflix’s North American offering, but Sarandos said it would quickly localise with local content and payment methods. It will also add Arabic subtitles to all English-language content. “We can know a lot about specific markets based on ratings, box office and even piracy data, but we’ll have a lot more information when we start operating, even after a few days,” Sarandos said.

Speakers elsewhere at DFM said that Netflix might already be the biggest SVOD player in the region due to viewers accessing the service via Virtual Private Networks (VPNs).