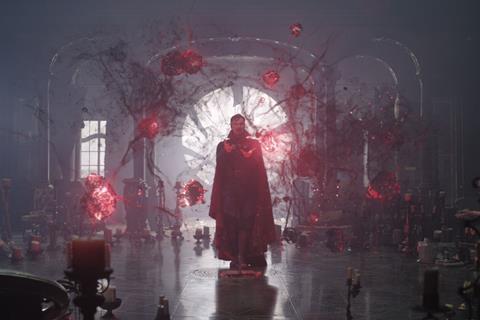 Disney’s Doctor Strange In The Multiverse Of Madness dominated again at the UK-Ireland box office, grossing £3m in its third weekend.

Holdovers led the box office for the second weekend in a row, accounting for the top eight places in the charts. New independent films, meanwhile, struggled to make significant headway.

A24’s Everything Everywhere All At Once built up momentum over its second weekend, climbing up to second place. The adventure comedy generated £839,974 – an impressive 23.3% increase compared to its launch weekend - for a £1.9m total so far.

Universal’s Downton Abbey slipped one place. In an encouraging sign that older audiences are returning to the cinemas post-pandemic, the sequel dropped just 22% on its fourth weekend to add another £755,979 and bring its total to £12.3m.

More holdovers followed: Paramount’s The Lost City saw its takings rise 2.6% in its sixth weekend, earning £357,000 and bringing it to £9.8m.

The biggest new release to debut was a live event. Trafalgar’s release of Twenty One Pilots Cinema Experience concert played at 188 venues on Thursday (19 May), with an encore at 35 venues on Saturday. It brought in £102,882 on Thursday, for a total of £114,873 including the weekend encores.

Then came more holdovers. The Northman added £95,939 for Universal on its sixth weekend, bringing its cume to £4.5m

Vertigo Releasing’s launch of Terence Davies’ Benediction, which explores the turbulent life of First World War poet Siegfried Sassoon, took £80,702 at the weekend from 238 cinemas in the UK and Ireland. Including previews, its total for the week was £100,635.

Irish filmmaker Colm Bairéad’s debut feature The Quiet Girl performed well its second weekend through Curzon and Break Out Pictures, grossing £75,985 – a 3% increase. Its total so far stands at £262,935.

Trafalgar oversaw another live event at the weekend: The Met Opera Live: Lucia Di Lammermoor, which screened at 148 venues on Saturday, with a few locations playing the opera off-date. Excluding Ireland, the live broadcast took £70,362.

Documentary a-ha: The Movie debuted with £40,907 for an event-led release focussing on Friday (20 May) night screenings.

The launch of Scottish period drama The Road Dance, released through Parkland Pictures, grossed £31,542 over the weekend, taking a total of £38,107 including previews.

Signature Entertainment launched Eskil Vogt’s The Innocents at 29 sites where it grossed £8,818 over the weekend.