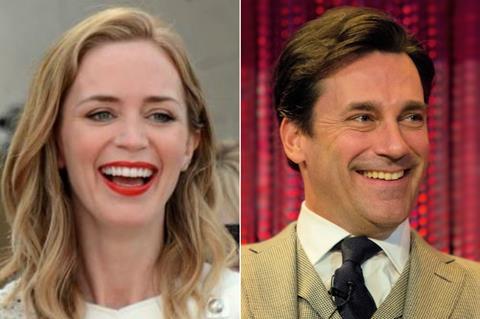 Emily Blunt and Jon Hamm have joined Jamie Dornan in the cast of John Patrick Shanley’s Irish drama Wild Mountain Thyme, with Bleecker Street and Lionsgate acquiring US and UK rights respectively on the title.

Blunt replaces Holliday Grainger as the female lead, with Grainger dropping out due to a scheduling conflict. Further new cast including Christopher Walken and Dearbhla Molloy.

HanWay Films negotiated the deal with Lionsgate UK; CAA and Andrew Kramer handled the US sale.

HanWay launched the package with Dornan and Grainger in the lead roles at Cannes in May.

An adaptation of Shanley’s own Broadway play Outside Mullingar, the film will shoot on location in Ireland from September 30.

Dornan and Screen Star of Tomorrow 2004 Blunt will play Anthony and Rosemary, star-crossed lovers whose families are caught in a feud over a hotly contested patch of land separating their two farms. Hamm plays Anthony’s American cousin Adam, with Walken as Anthony’s father and Molloy as Rosemary’s mother.