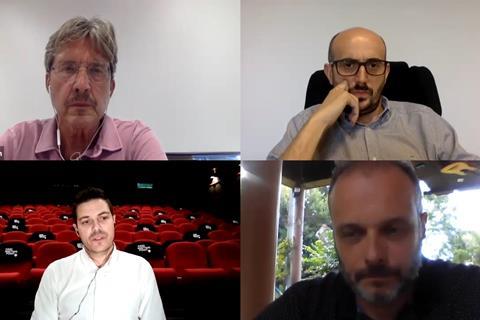 The full extent of the challenges facing public film bodies in the former Yugoslavia was laid bare in a Sarajevo CineLink Talk, exploring their response to the virus crisis.

The film bodies represented on the panel, which can be watched in full below, have yet to assemble precise data on the losses endured since the pandemic began but delegates’ remarks made clear that these losses have been severe.

“It was most visible to the public when the cinemas closed and that whole infrastructure came to a grinding halt but, behind the cinemas, the whole production sector was frozen for the better part of three months,” said Chris Marcich, director at the Croatian Audio-Visual Centre (HAVC).

The freeze in production had obvious knock-on effects with crews and freelance artists out of work. “It was quite traumatic,” said Marcich of the lockdown. The Croatian government intervened to help the struggling creative sector, providing “subsistence compensation” to freelance artists and keeping companies whose turnover had plummeted in business. “We were kept on life support for a period of time that helped put us in a position to start up again,” he added.

Cinemas in Croatia are now reopening but production has yet to pick up and exhibitors need films to screen. “We fell short in our obligation to keep the system alive,” Marcich acknowledged.

The message from Montenegro was very similar. “Cinemas are having most of the problems. Their losses are in hundred of thousands of Euros,” said Sehad Čekić, director of Film Centre Montenegro. “Some of the shooting that should have happened in May, June and July was postponed and so some of the jobs were lost.”

“With a glimmer of hope that the industry is reopening, how can we ensure that all the segments of the business chain are supported equally,” asked Sarajevo’s head of industry Jovan Marjanović.

Several film bodies attempted to support script and project development - work that could be undertaken at home – during lockdown. “That was our focus,” said Čekić.

However, when HAVC had its most recent call for applications in early summer, it covered everything from development to production and distribution.

“We have a backlog of approved projects that span at least five years…that are not moving,” said Marcich, as HVAC debates whether to invest further in these projects to move them into production. “We didn’t feel it necessary to boost the number of projects we have in development.”

Five new feature film projects, including one animated film, were approved. Investments were also made in several minority co-production projects.

HAVC has also introduced a small new fund to cover extra expenses incurred in adhering to Covid shooting protocols. Both local and international projects have now resumed shooting in Croatia.

Preserving co-production “at any cost”

Gordan Matić, director of Film Centre Serbia, provided a snapshot of the situation in Serbia. In the latest funding round, the amounts for student films and debut films have both been cut by 20% but the budget, he said, was otherwise stable. “We hope the cinemas will reopen at the beginning of September and that some festivals will restart,” he said.

Serbian distributors and exhibitors continue to struggle but Matić said four fiction films are now in production as well as at least two documentaries and five TV dramas.

Speakers all made clear that the pandemic would not force them to pursue isolationist policies.

“We want to co-produce. We need that kind of exchange but also to open some kind of broader market,” Čekić said. With a population of only 600,000, Montenegro will continue to co-produce in order to give its films “broader appeal”.

“I must say that we will preserve co-production at any cost,” said Čekić.

“We rely on partnerships, whether through formal co-production or through the [EU] MEDIA Programme or Eurimages. Without those forms of cooperation, it is not possible to close budgets,” said Marcich of the Croatian film sector’s dependence on partnerships. “That is going to be one of the biggest obstacles in the future if this crisis is not brought under control.”

“We are oriented for co-production,” agreed Serbia’s Matić, drawing attention to seven projects which it supported this past Spring and around 10 projects that it will look to co-produce in the autumn.

However, Marcich also spoke of the “disconnect” caused by Covid crisis. “However beautiful it is to look at all of you over the computer, it is not really a substitute for the personal contact you need especially when you’re looking at making partnerships, pitching and talking through ideas. The lack of the human element is a problem.”

In times of crisis, moderator Marjanović pointed out that funding for cultural activities is often cut.

“Nobody knows definitely what will happen,” said Matić, pointing out that Covid is likely to change audience tastes and expectations - and that funding decisions made now for films that will appear in several years’ time should acknowledge this. “But we will adapt,” he added. “Filmmakers are adaptable. All artists are adaptable…we will do the best that we can in the circumstances that we are.”

“In the region, we are hoping for the best and getting ready for the worst scenario all the time,” said Montenegro’s Čekić of the many challenges beyond Covid that those in the former Yugoslavia have regularly faced. He added that uncertainty remains on how festivals might evolve post-Covid.

Marcich pointed out that, “despite all expectations, the tourist sector has performed relatively well this summer.” This has boosted hopes that the audio-visual budget in Croatia can be preserved. “That’s about as much as we can realistically hope for now.”

Another question raised was how streaming will impact the film distribution eco-system in the region.

“In Croatia, we’ve seen a number of initiatives to put content online,” Marcich said. “There has been some take-up but the reality has been - at least in so far as the dominance of some of the major platforms – we need to put more emphasis on cooperation within our countries and between us to launch viable platforms that will be interesting to the public.”

“Yes, there is a need in the region for bigger platform with a lot of exclusive material. That is the future we are facing and that we should work on,” sadi Čekić.