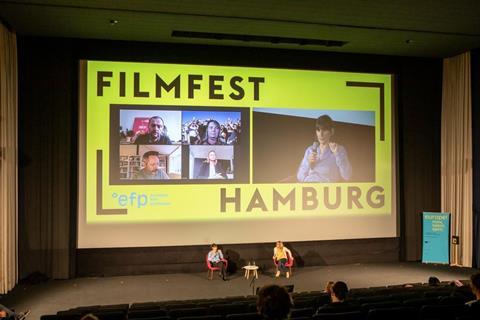 European sales executives TrustNordisk’s Susan Wendt, Bankside Films’ Stephen Kelliher, New Europe FIlm Sales’s Jan Naszewski and Level K’s Tine Klint came together at the Filmfest Hamburg last week to talk about how they have adapted their business to the Covid-19 pandemic and the challenges of working virtually.

They were talking at a panel event called Market Changes = Market Opportunities? Producers meet World Sales, organised by Filmfest Hamburg wtih European Film Promotion (EFP) and Filmförderung Hamburg Schleswig-Holstein. It was moderated by EFP CEO Sonja Heinen with EFP’s Susanne Davis, the head of film sales support, who were both physically in Hamburg; the four sales agent participated via video link. There was an audience of around 40; half  of whom were in the auditorium of the CinemaxX 3 cinema, and the other half watching around the world online.

“One of the most important things as a sales agent is the face-to-face meeting,“ said Wendt. “It’s a people’s business, being at the festivals, hearing the rumours and the talk between competitors and people from different countries. Missing out on all that has been really tough.“

The panel also discussed how the flow of new product to the sales agents has also been curtailed this year by the effects of the pandemic, as film production has been halted, postponed or cancelled completely.

“We had three films about to start production which were all postponed,” Kelliher recalled. “When you look at a company of our size, the cancellation of three films has a significant impact on your bottom line and cashflow and on when revenue is going to be received. That was immediate concern for us.”

When looking to source new titles for its sales slate, Kelliher explained Bankside “focused on films that had already been shot, because we knew there was going to be a hiatus in production. Using the contacts we have with producers, we picked up three films — including two European — which were in post-production.” He did admit that it is more of a challenge “to find films that have already been made that fit your taste or the brand of your company, and that you feel you can be successful with on an international basis.”

Naszewski, meanwhile, described the situation over the last six months as being very frustrating. He said he felt stuck between two mindsets - that of distributors and that of producers. On the one hand, he said, the feedback from distributors was very much along the lines of “take it easy, let’s see what happens – before we spend money, let’s evaluate where we are”. Whereas the producers were ‘calling us all the time asking what’s happening. Producers are like sharks, they are always swimming and in financing mode all the time, so we kept on getting scripts and requests for letters of intent.”

“We have been attending all the coproduction markets held virtually and have been receiving large numbers of projects,“ Kelliher added. “The door is very much open [to producers] and one of the things to take away from this period is that the demand for content isn’t going away.”

At the same time, the panel acknowledged, the uncertain situation in the international film festival landscape is posing a particular challenge for introducing smaller, more fragile films to the market and prospective buyers.

“These films need a physical festival to launch, along with the press and attention that comes out of it,“ Naszewski explained. “The problem is that either the festivals are not happening or they have less slots. Toronto, for instance, had 50 slots rather than 300.”

Meanwhile, Tine Klint of LevelK, which operates both as an international sales company and global digital aggregator, said that since the pandemic, “the numbers increased on all platforms as well as the interest from distributors to use aggregation services.”

Yet she pointed out that some titles had to be released much faster on to the platforms than was normally the practice. “When we are working as an aggregator, the best thing is to be ready three months before the release on the digital platform,” she noted. “But that hasn’t been possible this year.”

The panel agreed the first time this ‘new normal’ hit home was when Cannes dropped plans for a physical festival and rescheduled a virtual market. “We fully embraced the virtual Cannes,“ Kelliher recalled. “We needed a fixed set of dates when the industry was going to collaborate, come together and discuss new projects and films, and it was an incredibly positive experience for us.“

Although Wendt admitted her expectations of the market had initially been quite low, she realised in retrospect “the positives that there were market screenings where we had an opportunity to show more films than usual.”

Naszewski, too, said he had not fazed by a virtual Cannes, even when he learnt that Magnus von Horn’s Sweat, which is sold by New Europe Film, had been selected for the Cannel Label.

“A lot of companies didn’t seem to know what it meant and only a few really went for it,” he said. “We treated it as if Cannes was really happening, doing posters, trailers and reviews. We sold the film to a lot of territories for pretty good prices and did similar business to what we had achieved with the Icelandic film White White Day in the Semaine the previous year.“