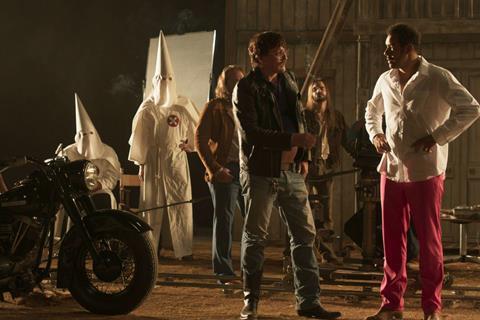 Enfant Terrible was the only German film to be selected for this year’s Cannes 2020 label and Hamburg is the first time the film will screen in front of a live audience. Weltkino is releasing in German cinemas from October 1.

Roehler will be in town for the opening night of the mostly physical festival. Further attendees at opening night will include Enfant Terrible producer Markus Zimmer of Bavaria Filmproduktion and cast members including Oliver Masucci, who plays Fassbinder, Katja Riemann, Alexander Scheer, and the veteran actress Isolde Barth who appeared in six of Fassbinder’s films such as The Marriage Of Maria Braun and Lola.

There will also be screenings in four other Hamburg cinemas of Fassbinder’s seminal films The Bitter Tears Of Petra von Kant, Lola, In A Year Of 13 Moons, and the director’s last film Querelle.

Covid-19 safety rules in Hamburg allow groups of up to 100 people to gather inside with an official permit, as long as no alcohol is served. Covid-19 restrictions mean German cinemas are operating at a capacity of around 30%.

The measures mean festival director Albert Wiederspiel and his programming team have been forced to reduce the number of films shown over the next 10 days by almost half to 76 titles. However, they have retained the Filmfest’s traditional 12 sections ranging from Transatlantic (cinema from North America) and Veto! (political films) through Voilà! (Francophone films) and Asia Express (Asian film cultures) to Vitrina (Spanish and Portuguese-speaking cinema) and Grosse Freiheit (New German Cinema).

In addition, the Filmfest is presenting the world premiere of Cortex, German actor Moritz Bleibtreu’s first foray into directing. Festival-goers will have the opportunity to see film and TV actor Bjarne Mädel’s directorial bow with Mit Sörensen hat Angst in the Television sidebar.

The second annual Contemporary Cinema in Focus strand sees Wiederspiel and his team turn their gaze on North and South America to showcase the work of Chile’s Pablo Larrain and US filmmaker Kelly Reichardt.

The films to be screened will include Reichardt’s 1994 debut River Of Grass and Larrain’s 2008 Tony Manero as well as their latest films First Cow and Ema, respectively. The two filmmakers will be present virtually at the Filmfest through one-hour in-depth pre-recorded interviews which will also be streamed via the festival website.

Moreover, in a sign of solidarity with organisers of other film events in the city, the Filmfest has provided a window for Hamburg’s Documentary Film Week which had to be cancelled earlier this year because of the pandemic.

Around 50 titles in the Filmfest’s programme, all geo-blocked for Germany, will be available via the new Streamfest Hamburg platform. A share of the revenue will go to Hamburg’s participating cinemas.

“The concept was coordinated with the cinema managers,” Wiederspiel explained. “By restricting the number of VoD tickets available it will ensure it remains a sustainable model preserving the ecosystem of distribution, festivals and cinema exhibition.”

The talking points to be discussed in the various panels will include local filmmakers’ experiences of film shoots during the pandemic, the work of an intimacy coordinator on a film set, Netflix’s terms of trade for European producers, and the application of artificial intelligence to calculate box-office expectations for European arthouse films.

There will also be a joint event between European Film Promotion and Filmförderung Hamburg Schleswig-Holstein where European sales agents will give an insight into the rapidly changing markets for European films.

The Filmfest will close with the screening of Chloe Zhao’s Golden Lion winner Nomadland on October 3.