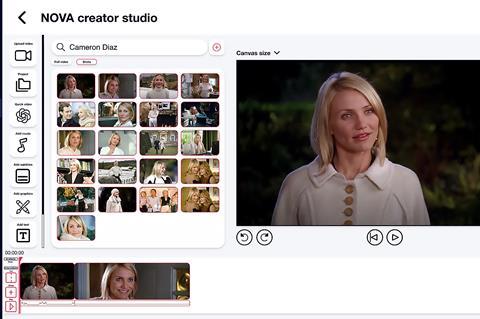 In addition to the cash award decided by an independent jury, thanks to support from the Basque Government Department of Economic Development and Infrastructures, the winning company is also eligible to work out of an incubation space for a year at one of the Business Innovation Centres in the Basque Country Technology Park Network, as well as the potential to access funding of up to €500,000 to develop their projects.

Jose Manuel Arias of San Sebastian’s industry office explained the festival “wants to position itself as a hub for reflection on technology and the audio-visual industry… Since the emergence of new technologies in the audio-visual field, the processes of creation and production have hugely changed. The Festival couldn’t look aside and started in 2018 an activity called Zinemaldia and Technology, seeking to promote a coming together between the world of film and IT innovation.”

The Zinemaldia & Technology programme is officially being held online on Friday September 25 due to the pandemic and includes a masterclass with sound technician Marc  Orts. His credits include The Orphanage, Buried and A Monster Calls.

However, some of the startups’ representatives will be in San Sebastian and can have physical meetings. FilmChain co-founders Maria Tanjala and Irina Albita said, “It is extraordinary to go back to a market that takes place in person and online. We had a fantastic experience in February at Berlinale EFM; at SSIFF, we expect fruitful conversations and meetings with like-minded people keen on reviving the industry…We very much look forward to meeting regional funds and local production companies.”

Selected from 40 submissions, the five Startup Challenge finalists are: Cinesmart, a Spain-based platform based on advergaming and aimed at collecting big data for cinema exhibitors and other events; FilmChain, a UK-based company developing blockchain-enabled digital collection service that collects, allocates and analyses revenues for film, TV and digital content; La Quinta Pared (The Fifth Wall), a mobile app developed in Germany where the user’s mobile becomes the mobile of the person playing the lead part in a film to encourage the development of interactive transmedia narratives; PromoMii, a UK-based app using artificial intelligence to automate the video creating and editing process; and Visualyst, a Norwegian company using artificial intelligence and machine learning to check video content against regulatory policies or automate specific processes such as age classification.

Last year’s Startup Challenge winner, Largo AI, has gone on to sign a collaboration with the European Producers Club and was featured at Berlin’s EFM Horizon.

Michael Moss, CEO of of PromoMii said the Startup Challenge was a “great opportunity.” He added, “We are in the middle of a global and generational shift where technology innovations are changing how we all consume video and films. It is important to be at the forefront of this shift and to be curious about the opportunities these new ways of engagement offers. That an important film festival like San Sebastian promotes this obviously means a lot for the industry, the future directions it will take and the technological innovations they will experiment with.”

Miguel Silva, founder and CEO of Visualyst, added, “We are an early-stage startup that just finished the first version of a product that we believe will help the film industry accelerate the typically cumbersome compliance review process and thus distribution of content worldwide.” With San Sebastian, he added, “We are looking to show our tool to as many potential users as possible and get their feedback. We want to start meaningful conversations with the industry.”