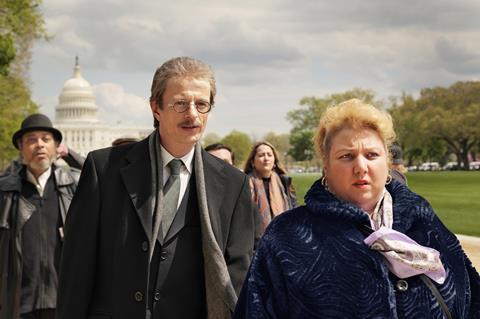 Berlinale titles Rabiye Kurnaz vs. George W. Bush from Andreas Dresen and We Might As Well Be Dead from Natalia Sinelnikova are among the nine titles in the running for Germany’s submission for the 95th Academy Awards (March 12, 2023).

Dresen’s comedy-drama screened in competition at this year’s Berlinale where it picked up a Silver Bear for best screenplay and Meltem Kaptan’s lead performance. The Match Factory handles international sales.

Maggie Peren’s The Forager, which screened at Berlinale as a special gala presentation, is also in the running along with 2021 Locarno title No One’s With The Calves from Sabrina Sarabi.

Also in the mix to be Germany’s Oscar submission are anti-war film All Quiet On The Western Front from Edward Berger, a Netflix production which will have its world premiere at Toronto International Film Festival in September; Eline Gehring’s Nico; Til Schweiger’s Lieber Kurt; Natja Brunckhorst’s Mostly Minimalistic; and Annika Penske’s Talking About The Weather.

A jury of industry experts will select Germany’s Oscar entry after a two-day viewing in Munich on August 23-24.

The US Academy will announce its shortlist for best international feature on December 15 with full nominations revealed on January 24. Germany last won the category in 2007 with Florian Henckel von Donnersmarck’s The Lives Of Others.