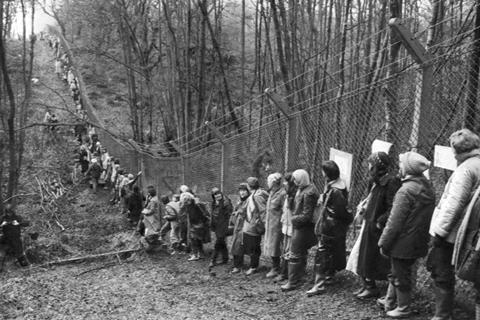 ‘Mothers Of The Revolution’

The Greenham Common protest camps, which played a part in the demise of the Cold War, are to be the focus of a feature-length documentary from New Zealand’s GFC Films and UK-based Universal Pictures Home Entertainment Content Group (UPHE Content Group).

Production is underway on Mothers Of The Revolution, directed by Briar March (Coffin Club, There Once Was An Island) and produced by prolific New Zealand filmmaker Matthew Metcalfe (The Dead Lands, McLaren) and Leela Menon (Born Racer, Wayne). It has been earmarked for release in autumn 2021.

The Greenham Common protests began in 1981 when a group of Welsh women, known as the Women For Life On Earth, marched from Cardiff to Greenham Common in Berkshire to protest the 96 US Cruise nuclear missiles being placed at the RAF base there.

Realising that the march alone would not be enough to get the missiles removed, the women camped outside the base to continue their protest – one that would last nearly 20 years. The Greenham Women realised that without a similar peace effort in the East, their protest in the West would be ineffectual so travelled to Russia to meet with like-minded activists.

When the Cold War ended and the Berlin Wall fell, Russian president Mikhail Gorbachev referenced the importance of the Greenham Women’s contribution.

The film is feature interviews with key participants alongside archive footage from the Greenham Common Women’s Peace Camp.