Guardians of the Galaxy tops UK box office with $10.7m 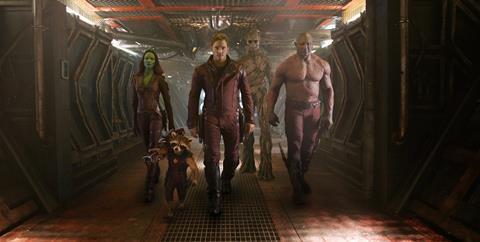 Marvel Studios’ riskiest outing to date Guardians of the Galaxy has echoed its domestic success by landing top of the UK box office on debut.

In terms of Marvel Studios outings in the UK, Guardians posted the fifth biggest debut and the biggest for a non-sequel, ahead of Iron Man’s $9.2m (£5.5m) bow from 500 sites.

The last two Marvel outings – Thor: The Dark World and Captain America: The Winter Soldier – capped at just above and just below £20m, and Guardians could be set to topple both of those, thanks to the strong start and terrific word of mouth.

The arrival (and subsequent impact) of The Inbetweeners 2 this Wednesday [Aug 6] could be key to a lengthy run for Guardians.

Shaping up to be one of the year’s biggest successes, Dawn of the Planet of the Apes fell a slim 19% in its third weekend for an additional $5m (£3m).

Fox’s sequel is now up to a mighty $39.5m (£23.4m) and, as expected, has surpassed Rise of the Planet of the Apes’ $35m (£20.77m) final UK result. It is currently the year’s fourth highest grosser behind The Amazing Spider-Man 2, which it will overtake very shortly.

Also for Universal, with event cinema takings now included in the official Rentrak chart, Secret Cinema’s Back to the Future event grossed $905,000 (£538,000) over the weekend and has amassed $1.2m (£720,000) over its four shows to date. With a mostly sold-out run, expect grosses to remain steady throughout.

Arriving in the UK almost eight months after its US release, The Nut Job enjoyed a $1.1m (£666,000) debut from its 406 sites through Warner Bros. It should prosper mid-week but from Friday, Planes 2: Fire and Rescue expands nationwide to provide family competition.

This week sees saturation releases for Disney’s Planes 2: Fire and Rescue, following its Scotland opening on Aug 1, and Entertainment’s The Inbetweeners 2 (opens Aug 6), which will be looking to repeat the £45m success of its predecessor.