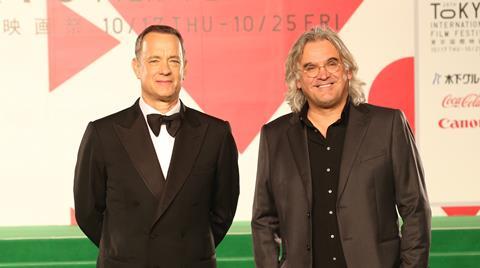 Competition jury head Chen Kaige quoted from Hank’s Forrest Gump with “’Life is like a box of chocolates – you never know what you are going to get.’ But I promise we will treat every film equally.”

In a surprise visit, Japanese prime minister Shinzo Abe joined Hanks and Greengrass on the green carpet and onstage, also quoting Forrest Gump with: “Life is like a box of chocolates. This describes my life as I currently proceed with my economic policies in Japan. I hope the content industry will be at the core of the economic rise because there is great potential for the Japanese film industry.”

Referring to the Cannes award-winning Koreeda Hirokazu hit that Stephen Spielberg has picked up for remake, Abe said: “The Japanese film Like Father, Like Son will be distributed in 230 different territories and remade as a Hollywood film. I hope more and more Japanese contents will be transmitted to the rest of the world.”

Introducing his film, Hanks said: “The first time I met [the actual] Captain Phillips, he was in his stocking feet, drinking a beer in his pajamas and watching a basketball game and I thought - this is perfect casting.”

He added: “I think you have nine days of marvelous films coming your way. Let’s start now!”

TIFF runs from Oct 17-25 and will close with local film Kiyosu Conference starring Yakusho Koji, who was also on the green carpet last night.