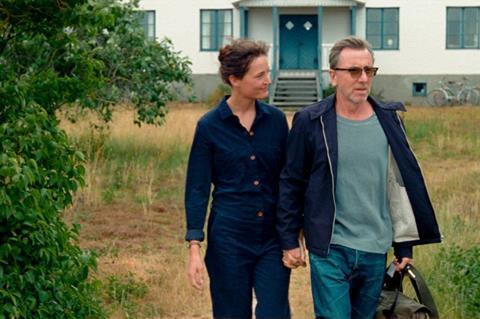 Hansen-Love wrote the drama about an American filmmaker couple, Chris (Krieps, Phantom Thread, Old) and Tony (Roth, Once Upon A Time In Hollywood, The Hateful Eight), who retreat to the mythical Fårö island for the summer, hoping to find inspiration amid the wild landscape where Bergman lived and shot his most celebrated works.

As days spent separately pass by, Chris develops a fascination for the island and souvenirs of her first love resurface. As the lines between reality and fiction become blurred, the couple struggle.

IFC Films has collaborated with Hansen-Love on Father Of My Children, Goodbye First Love, and Things To Come, which won the best director Silver Bear at the 2016 Berlinale.

Arianna Bocco, president of IFC Films said, “We are honoured to be working with Mia and Charles Gillibert and his team once again to bring this exceptional film to American audiences. With a brilliantly layered screenplay and an amazing cast, Bergman Island is a major work from one of the most exciting auteurs working today.”

Gillibert, who has collaborated with the director twice before, added, “At a time when there are many ways to distribute a movie, it is with confidence that we entrust Bergman Island to IFC Films. We know that Arianna Bocco and her team will bring it into the world with great creativity and care like they have with Mia’s other films.”

Bocco brokered the deal with Grégoire Melin at Kinology and UTA on behalf of the filmmakers.