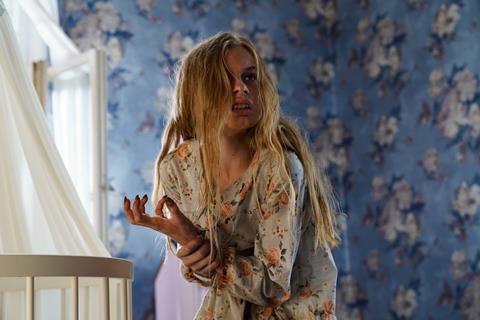 In what is one of the first acquisitions of the virtual Cannes market, IFC Midnight has beaten out rival bids to acquire North American rights from Wild Bunch and CAA to Finnish coming-of-age body horror Hatching.

The distributor pounced after watching a promo and the deal closed late on Friday night (June 19). The plan is to launch Hanna Bergholm’s feature directorial debut at a major international festival in 2021.

Hatching is in post and centres on Tinja, a 12-year-old gymnast desperate to please her mother, a woman obsessed with presenting the image of a perfect family to the world through her popular blog.

One night, Tinja discovers a strange egg. She hides it and keeps it warm until it hatches. What emerges is beyond belief.

IFC Films’ executive vice-president of acquisitions and productions Arianna Bocco and director of acquisitions Aijah Keith brokered the deal with Wild Bunch’s head of sales Eva Diederix and CAA Media Finance on behalf of the filmmakers.

“It falls in the canon of classic coming-of-age stories that terrify you,” Bocco said of the film, adding that it was reminiscent of Raw and The Babadook.

Bergholm added, ”We had an amazing international crew during our production, and I’m very happy that all their work will receive the recognition it deserves. This partnership just further proves to us that the story of Hatching is truly universal.”

The deal for Hatching marks the latest example of how IFC Midnight is championing striking content by feature debutantes which include Sundance entry Relic by Natalie Erika James, Dave Franco’s The Rental, Egor Abramenko’s Sputnik and Carlo Mirabella-Davis’ Swallow.

The company is riding high following a record-breaking theatrical run for The Wretched. The supernatural thriller has grossed more than $1.5m by supplementing a limited number of theatrical sites that were open during the lockdown with drive-in engagements.