'The Divergent Series: Insurgent' leads US box office with $52.3m 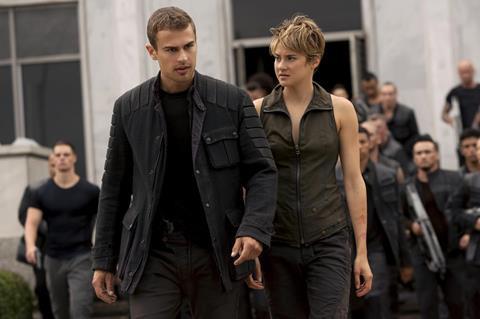 The Divergent Series: Insurgent has dethroned Cinderella at the US box office with a confirmed $52.3m bow from its 3,875 locations.

Lionsgate’s sequel looks set to post a domestic bow on par with that of its predecessor, which started with $54.6m from 3,936 and went on to take $150.9m.

It marks the first time since the Hunger Games series that two films (from two books in a series) have grossed more than $50m on its opening weekend.

A couple of uninspiring new openers landed in fourth and sixth. Open Road’s The Gunman was off-target with just $5m from 2,816 locations, a long way short of the $24.7m bow of Pierre Morel’s Taken.

Expanding to 32 locations following its excellent $160k debut, RADiUS-TWC’s It Follows scared up an additional $344,000 for a ten-day running tally of $565,000. As a result of its strong theatrical run, the VoD release of It Follows has been delayed and the critically acclaimed horror will roll out to over 1,000 locations next weekend.

Roadside Attractions expanded Yann Demange’s ‘71 to 116 locations, resulting in a $237,000 fourth weekend for $693,000 to date, as Bleecker Street’s Danny Collins achieved the best average of this week’s new openers after a $73,200 debut from five locations.

This week sees wide releases for Fox’s Home and Warner Bros’ Get Hard. A24’s While We’re Young, IFC’s The Riot Club and Magnolia’s Serena are among the films receiving a limited release.