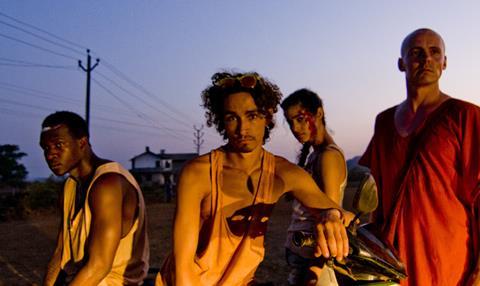 London-based production company SUMS Film & Media has released the first image to emerge from the set of its new production Jet Trash, which has just completed filming in Goa, India.

The feature is directed by former Screen Star of Tomorrow Charles Henri Belleville whose previous feature The Inheritance won the inaugural Raindance Award at the BIFAs and whose latest production Mortlake starring Tom Hardy is in post-production.

He stars alongside Osy Ikhile, who will be seen in Ron Howard’s upcoming Heart of the Sea, Sofia Boutella (Monsters 2: Dark Continent), Jasper Pääkkönen (Heart of a Lion) and Craig Parkinson (Control, Four Lions).

The film is written by Simon Lewis (The Anomaly, Tiger House) and Dan M Brown and is based on Lewis’s own cult travel novel, GO.

Jet Trash centres on Lee and Sol, who have escaped London in favour of the sunshine and parties of Goa. But they soon find themselves on the run from an old enemy set on ruining the party.

SUMS Film & Media, which launched in 2012, is a London-based production company led by producer Andy Brunskill. SUMS is currently shooting short film Senka, directed by Dan Sully, written by Lewis Bowman and Sully and supported by Creative England in partnership with BFI NET.WORK.

Sully and SUMS also have a feature in development with Vice Films, which will be announced later this year.