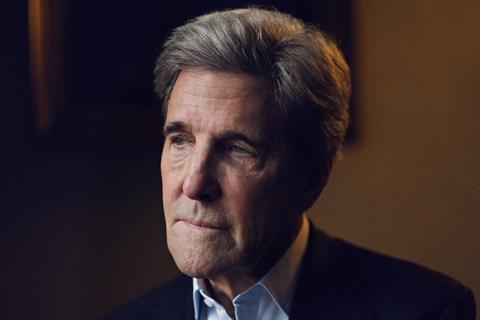 “I’ve been in the business of communicating my whole life,” said the former US Secretary of State on moving from politics and activism to entertainment.

“There has always been a real synergy there been between politics and filmmaking. You’re trying to persuade people that something or have an impact and move people and get them to act and respond.”

In a Zoom call with Screen from his home from Boston, Kerry said that he’s been a film lover for a long time – during his university days, he watched a lot of Fellini films even shot some footage on 16mm and Super8. His other brushes with the film world include being the subject of George Butler’s 2004 documentary Going Upriver; meeting with Hollywood studios in 2016 to discuss ideas about Isis propaganda; and starting a collaboration on a project with Leonardo DiCaprio’s Appian Way.

“I’m a film buff like a lot of people,” said Kerry. “I’m not a crazy buff, I can’t tell you every actor in every film, but I know a good film when I see it and I also know that too much of what you see is crap. I’m stunned at how some of these projects get greenlit.”

Now he wants to help create entertaining content that can also carry important messages, such as the realities of climate change.

Fingerprint, based in the UK with hubs in the US, India and France, will work across fiction features, documentary film series and scripted series as well as digital content.

The Fingerprint team includes CEO Melanie Dicks, a producer and co-founder of sustainability consultancy Greenshoot; producer and impact campaigns director Jess Hines, who has worked in content in the UK and India for 20 years; producer Lia Walton, co-founder of Cloverleaf Pictures; and development executive Alexandra Macewan, who previously worked in development at All3Media-backed Seven Stories.

The company plans to tackle social issues – especially climate change – in its work, as well as championing gender equality in front of and behind the camera, as well as committing to green production practices. “Authenticity matters most” is one of Fingerprint’s mottos.

Kerry first met producer Walton through a mutual friend, and they began discussing the project about Rachel Carson, the late US scientist, environmentalist and influential author of Silent Spring. He found the whole team at Fingerprint shared his ethos.

“Some movies have had such a profound impact on people and have changed politics and culture,” said Kerry. “I had been banging my head against the wall for a number of years – both as senator and then as Secretary – about how we’re going to mobilise people again.”

Kerry says he will read scripts and give notes when needed, but will assist Fingerprint in other ways like connections to finance and raising the profile of their projects.

Kerry has been fighting for the environment for 30 years, and he says that storytelling across films, TV and digital content can be a new way to inspire the public. “How are we going to get people to grab onto this thing, without being so intimidated by it and that just want to stay in bed all day and hide under the covers?,” he said.

Kerry pointed to the impact of films like The China Syndrome, which he said “had a profound impact on people and changed the discussion [about nuclear power]”.

“Film can consume you, it can emotionally overwhelm you, it can be beautiful and raging and frightening,” said Kerry. “I think every emotion you have can be tapped into visually, if you tell a good story. Everybody loves to watch a film and get caught up in somebody’s life adventure or drama. Film and TV are some of the most powerful mediums we have.”

However, Fingerprint does not plan to make heavy handed stories preaching about the climate crisis. “It doesn’t mean that every film you do is pushing climate in your face,” Kerry said. And not every climate-related story has to show a dystopian future.

He points to Benedikt Erlingsson’s Woman at War as a great narrative film that included environmental messages in such an entertaining way. “I thought that was spectacular,” he said of the Icelandic feature (which premiered at Cannes Critics’ Week 2018) about a middle-aged woman who becomes a climate activist while also trying to adopt a child.

Kerry is also interested in developing a scripted series that will look at decades of denialism, which he hopes could be told in a style similar to Mad Men. “There’s a really interesting story there about the real characters who have screwed up people’s lives for 40 or 50 years,” exploring PR spin from the tobacco and oil industries, and later climate change and COVID deniers.

Of course, Kerry’s former boss Barack Obama and the former first lady Michelle Obama have also moved into the film world through their production company Higher Ground, which has backed films including American Factory and Crip Camp.

“I love what they’re doing, I think it’s fantastic,” added Kerry. “They have a perfect understanding of this medium. The power and the urgency of communicating truth and getting us back to a better place.”

Kerry hopes Fingerprint and Higher Ground may collaborate in the future, and said: “Nothing would please me more.”