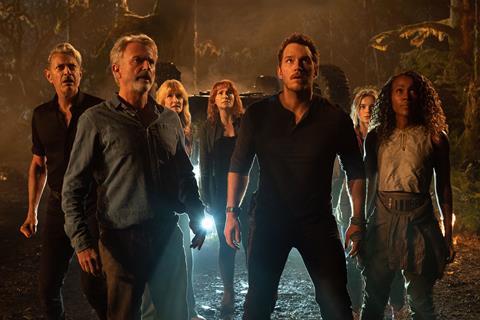 Among international markets, the top performer was China, with an estimated $52.5m – the biggest for a US studio film in 2022, despite the current impact of Covid on cinemagoing. It’s also the biggest box office number for a film in China in more than three months. So far in 2022, China box office is running 39% behind the pace of 2021 at the same stage of the year, according to data by Artisan Gateway.

UK/Ireland was the second-best performer for Dominion at the weekend, with an estimated $15.4m, delivering Universal’s fifth-highest three-day weekend of all time, beating 2018’s Jurassic World: Fallen Kingdom (which however debuted bigger in the territory overall, thanks to a five-day opening period).

France, with an estimated $9.7m, and Australia, with $8.5m, likewise beat Fallen Kingdom in their territories. Overall, Dominion opened number one in 52 new international markets, and in North America.

In holdover markets, Mexico led the way with $8.1m (a 46% drop), taking the total after 10 days to $30.4m, ahead of both Jurassic World and Jurassic World: Fallen Kingdom at the same stage of release.

Yet to open Dominion is Japan, which welcomes the marauding dinosaurs on July 29.

Paramount and Skydance’s Top Gun: Maverick achieved a solid hold in its third lap of international markets, dropping only 39% despite the challenge of a significantly expanded Jurassic World: Dominion. In North America, the film fell 44%.

UK/Ireland was once again the top international territory, with an estimated $7.0m in its third session, and a $63.0m total.

Japan moved ahead of both Australia and France to deliver the second-best international result, down just 6% from the previous session. Takings of $6.8m bring the Japan total to $33.9m.

Between Jurassic World Dominion and Top Gun: Maverick, the top two titles are utterly dominant at the global box office, grossing a combined $422.7m at the weekend – which is 92% of the total achieved by the top eight films in Comscore’s worldwide chart. Among the titles competing for the other 8% are two South Korean films: Lee Sangyong’s The Roundup, which has now hit an $81.2m global total, and Japanese director Hirokazu Koreeda’s Korea-set Broker, which just opened with $5.3m.

The Roundup just passed the 10m admissions milestone in South Korea – the first film of any nationality in the country to achieve this landmark outcome in the pandemic era, and the most-watched Korean film since Parasite.

Shrek 2 ($928.8m) and Bohemian Rhapsody ($910.8m) are the latest films to be overtaken at the worldwide box office by Doctor Strange In The Multiverse Of Madness, which has now reached $930.2m, and ranks 61st place in the all-time chart.

The latest weekend saw the Disney-Marvel film add another estimated $10.3m, taking the international total to $532.4m and the North American tally to $397.8m. The $930m total makes it the biggest box office hit of 2022, and second only to Spider-Man: No Way Home ($1.90bn) during the pandemic era.

Multiverse Of Madness has not benefited from release in either Russia or China, and is now 37% ahead of the $678m lifetime global total achieved by Doctor Strange back in 2016. That earlier film benefited from a combined $131.5m in China and Russia.