Seven world premieres and five international premieres include an animated movie for the first time in competition; US drama Low Down starring John Hawkes and Elle Fanning; and Hafsteinn Gunnar Sigurdsson’s follow-up to Either Way. 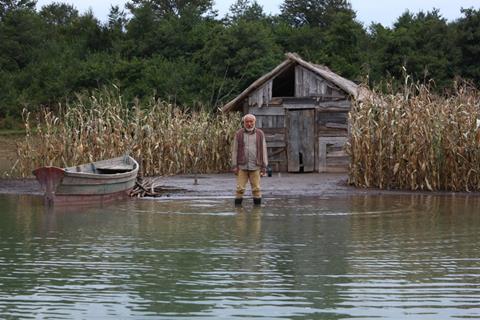 The 49th Karlovy Vary International Film Festival (July 4-12) has revealed the line-ups for its Official Selection Competition, East of the West Competition, Documentary Films Competition and Forum of Independents Competition.

“Many of the filmmakers, who explore less frequently trodden paths of cinematic expression, come from the countries of the former Eastern Bloc, which the KVIFF has long focused on.”

In the main festival section, renowned Georgian filmmaker George Ovashvili (The Other Bank) will introduce his long-anticipated film Corn Island, a psychological drama that uses captivating imagery and visuals to present a highly topical subject – the intense relationship between man and nature.

Leading Russian director Angelina Nikonova (Twilight Portrait) has chosen the festival for the premiere of her bitter comedy Welkome Home, set among the immigrant community in contemporary New York.

Hungarian director György Pálfi comes to KV with Free Fall, a grotesque look at contemporary society. Through seven stories, Pálfi presents a report on the state of humanity using his provocative imagination.

Intimate drama I’m Yours was filmed by Belgian director David Lambert, whose previous film Beyond the Walls was shown two years ago at Cannes’ Critics’ Week. I’m Yours depicts the difficult road to emotional fulfillment through the story of a young Argentine man’s unlikely relationship with an aging Belgian baker.

Miroslav Krobot, theatre artist and the only Czech actor to have appeared in films presented in Cannes, Berlin and Venice, will introduce his directorial debut Nowhere in Moravia. In this laconic rural drama with elements of dark comedy, Krobot channels Kaurismäki and the Mrštík brothers, with some of the Czech Republic’s best actors, led by Tatiana Vilhelmová, Ivan Trojan and Jaroslav Plesl.

The first animated film to be shown in competition at KVIFF is Rocks in My Pockets from New York-based Latvian filmmaker Signe Baumane. This “funny film about depression” describes the mental illness that afflicted her family for decades. The film also offers a look at the history of Latvia during the first half of the 20th century.

The third woman to be represented in the main competition is Czech screenwriter and director Andrea Sedláčková with her film Fair Play. This intimate drama about trying to preserve human dignity in the face of state-organized doping during the totalitarian 1980s focuses on talented young athlete Anna (Judit Bárdos) and her mother (Anna Geislerová).

This year’s representation of countries east of the Czech Republic also features renowned Kazakh filmmaker Nariman Turebayev with Adventure, a loose adaptation of Dostoyevsky’s White Nights. The contemporary tale of lonely Marat’s fascination for the complex Mariyam was shot on the streets of Almaty.

Icelandic filmmaker Hafsteinn Gunnar Sigurdsson returns with his second feature, Paris of the North. It centres on a teacher who has managed to overcome his problems with alcohol, his frivolous rocker father, and the other inhabitants of an out-of-the-way village think about nothing less than what to do with their lives. Either Way screened at more than 50 festivals and was remade in the US as Prince Avalanche by David Gordon Green.

In the melancholic US drama Low Down, director Jeff Preiss presents the bohemian scene of 1970s Los Angeles, as well as the talent and self-destructive heroin-addiction of famed jazz pianist Joe Albany (John Hawkes), seen through the eyes of his daughter Amy-Jo (Elle Fanning).

In his second film, La Tirisia, Mexican director Jorge Pérez Solano presents the story of Cheba and Angeles Miguel, two women who are pregnant by the same man. They live in a small isolated village, and their attempts at leading a modest but dignified life are constantly attacked by a strange illness of the soul, “la tirisia”.

France’s Pascal Rabaté, winner of the Best Director Award at the 2011 KVIFF for Holidays by the Sea, returns in competition with the stylized and ironic morality tale Patchwork Family, in which hardened cynic Christian is punished for the swindles he perpetrated in a manner not unlike the medieval punishment referred to in the film’s original title (Tar and Feathers).

The world premiere of Virag Zomboracz’s Afterlife will open the East of the West competition. The Hungarian film combines humour and high drama as a man begins to see the ghost of his recently-deceased father.

East of the West features first or second features by directors from Central and Eastern Europe, the Balkans, Turkey, or the former Soviet Union. It boasts nine world premieres and three international premieres this year.

The other two world premieres are The Term, from directors Pavel Kostomarov, Alexander Rastorguyev and Alexey Pivovarov, about the political opposition to Russia’s Kremlin; and Tuning: K oblakům vzhlížíme, from Czech director Martin Dusek, a nontraditional portrait of a day in the life of a man whose car has become his best friend.

KVIFF’s Forum of Independents competition will open with Czech-Burmese film The Monk. The debut of upcoming Burmese filmmaker The Maw Naing, it follows Zawana, who enters a monastery and has to take up an unexpected challenge when the superior falls ill.

Low Down IP
Jeff Preiss (US)