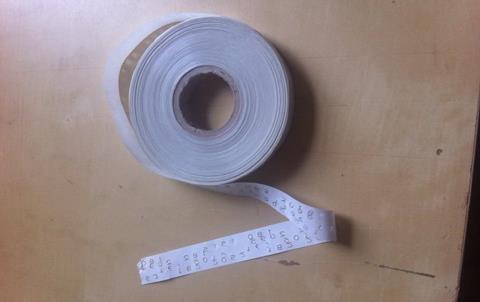 The British director, best known for films such as The Wind That Shakes the Barley and Kes, has resisted the move to digital and still works on a Steenbeck, cutting physical film stock with editor Jonathan Morris.

But with the widespread move to digital, Loach believes Jimmy’s Hall could be the last feature film to use the flatbed editor and, less than two weeks into the cutting process, supplies are running out.

Speaking from the cutting room at Goldcrest Post London, Loach told ScreenDaily: “We’re making a start and putting the scenes together. But we’re finding that one or two of the support services are fading and one of those is in supplies of numbering tape.

“We’re scratching around to find if some numbering tape still exists so we can identify the sound and picture so the film remains in synch.”

Specifically, Loach is looking for 25-30 rolls of dry transfer tape, 13mm wide, developed for Acmade Film Edge Numbering (or edge coding) machines. They are due to run out by the end of next week.

Speaking of working on the Steenbeck, Loach said: “The basic technology is very good and there are advantages over cutting on the Avid, which is that it’s a very linear process and you have a sense of the ongoing rhythm of the film.”

“You can see the shape of a scene very easily and it has a handmade quality that you don’t get on a computer - at least that’s what we tell ourselves.”

Morris, who has edited many of Loach’s best known films and first worked with the director in 1980, said of the old school editing suite: “An advantage of Steenbeck’s is that they aren’t as instant as digital.

“On a Steenbeck, when you put up a roll of film 10 minutes long, you have to rewind it when you finished looking at it. That takes two or three minutes which is sometimes quite nice. It’s thinking time, a little pause.

“When I’m working on the computer, I feel driven by the machine as opposed to the other way round.”

“I suspect this will be the last film in this country edited this way, although people will still use the Steenbeck to view archive.”

Morris said he expects to have completed a cut of Jimmy’s Hall by Christmas and a fine cut by the beginning of February.

As previously announced by Screen, Wild Bunch handles sales. eOne will release in the UK.

ScreenDaily first reported in August that it could be Loach’s last narrative feature.

The 77-year-old director, who won the Palme d’Or in 2006 with The Wind That Shakes The Barley and Cannes’ Jury Prize in 2012 for The Angels’ Share, added: “Jimmy’s Hall was set in the 1930s with a big cast. I might not tackle another one on that scale again.

“I always think, “Maybe one more,” but common sense may prevail. I don’t want to go on until they’re saying, ‘For God’s sake, shut up’.

“But I’ll keep making a bit of trouble from time to time.”

It is believed Loach will focus on documentary.

If you can help, contact Eimhear McMahon at Sixteen Films 020 7734 0168 eimhear@sixteenfilms.co.uk