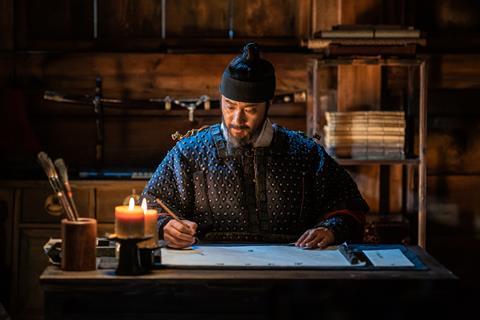 Hansan: Rising Dragon is the second film in director Kim Han-min’s trilogy about Korea’s legendary admiral Yi Sun-shin, an innovative and strategic naval commander who defeated the much larger Japanese invading fleet during the Imjin War (1592-1598).

The first in the trilogy, The Admiral: Roaring Currents, starred Choi Min-shik as Yi in the Battle of Myeongryang. Released in summer of 2014, it quickly became South Korea’s biggest box office hit of all-time and remains so to date with more than 17.6 million admissions.

The second in the trilogy stars Park Hae-il (Decision To Leave) as the admiral at the Battle of Hansan, five years before the events in the previous film.

“We are excited to bring North American audiences this much-anticipated second entry in the Yi Sun-shin trilogy,” said Doris Pfardrescher, president and CEO at Well Go USA Entertainment. “The vast success of the first film speaks volumes about the real-life admiral’s impact on history, and we are confident that Hansan: Rising Dragon will continue to captivate viewers while also shedding light on a very fascinating time in Korean history.”

The film debuted atop the local box office chart, ahead of Minions: The Rise Of Gru, with 386,189 admissions on Wednesday, July 27, according to the Korean Film Council.