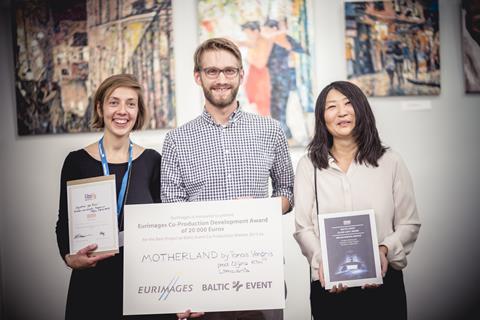 Lithuania was the big winner at this year’s Baltic Event when the awards were handed out during a ceremony in Tallinn’s historical town centre on Tuesday evening.

The Eurimages Co-Production Development Award - with a non-reimbursable subsidy of €20,000 to be used exclusively to cover project development costs - was presented for the first time this year in Tallinn.

A jury consisting of Petri Kemppinen, CEO of the Nordic Film & TV Fund, Polish producer Ewa Puszczynska, and Dorien van de Pas, head of New Screen NL and a consultant for talent development at the Netherlands Film Fund, chose the feature debut project Motherland by American Film Institute graduate Tomas Vengris, the son of Lithuanian immigrants living in the US

The €950,000 coming of age story will be produced by Uljana Kim’s Vilnius-based Studio Uljana Kim and already has Locomotive Productions from neighbouring Latvia attached as a co-producer.

Excerpts of Kristijonas Vildziunas’ latest film were shown as part of the Baltic Event’s Works in Progress this week.

Cinema ‘made in Lithuania’ also came out on tops for another new award, the FilmFly Award for the project with the most potential among the Works in Progress.

Just a Moment’s Dagne Vildziunaite, one of 2015’s Screen Future Leaders in Cannes, received a place on the new training programme, to be launched next January, for the project Together For Ever by Lina Luzyte, which is the first co-production between Lithuania and Romania.

Luzyte had developed her screenplay during a residency in Berlin as part of the Nipkow Programme and at the Torino Film Lab, and had the services of the internationally renowned DoP Oleg Mutu for her feature debut.

The Works in Progress jury of Karlovy Vary’s Lenka Tyrpakova, The Match Factory’s Zsuzsi Bankuti and Istanbul Film Festival advisor Azize Tan also awarded special mentions to the Egyptian-French Ali, The Goat and Ibrahim by Sherif Elbendary and the Austrian-Ukrainian co-production Ugly, which were presented in the new International Works in Progress section.

Ironically, the special mentions went unmentioned at Tuesday’s awards ceremony, while several of the participants of the Baltic Event expressed doubts about the wisdom or necessity for the introduction this year of the International Works in Progress since the reason for coming to Tallinn is specifically to see the latest projects from the Baltic region.

This year’s Screen International Best Pitch Award offering editorial coverage during a project’s life from development through production to festival presentation and distribution went to the Estonian project Erik Stoneheart by Ilmar Raag.

The €2.5m family film will be produced by Evelin Soosaar-Penttilä of Amrion Ltd., which has previously worked with Raag on such films as The Class, the most successful film ever made in Estonia, and his 2014 film I Won’t Come Back.

In addition, two free passes for the 2016 edition of the Cannes Producers Network were awarded to two producers presenting projects at the Co-Production Market: Norway’s Gary Cranner (Chezville) and Johanna Aust of Berlin-based Flickfilm.