Black Angel first seen as a short at theatrical screenings of Star Wars: The Empire Strikes Back. 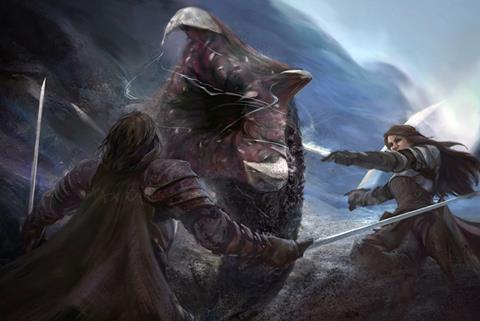 A short film shown before screenings of Star Wars: The Empire Strikes Back in 1980, is to be adapted into a new feature film starring Rutger Hauer (Blade Runner) and John Rhys-Davis (Lord of the Rings).

Black Angel: The Feature Film has partnered with crowdfunding platform Indiegogo to launch a 45-day campaign aimed at raising $100,000 (£66,000) which goes live from today http://igg.me/at/blackangel.

Production is slated for September 2015, with filming locations to include Hungary, Belgium, Morocco and Scotland.

The film is a co-production between Belgium, Hungary, Canada and UK.

The film will be directed and written by Roger Christian, who wrote and directed the original short and won an Oscar for his work on the art/set decoration of the original Star Wars in 1977.

Rewards in the crowdfunding campaign include a piece of the actual film negative from the original Star Wars: A New Hope, gifted to Roger Christian by director George Lucas.

Christian will re-team with producer Harald Reichebner, who worked with the director on 1994 biopic Nostradamus. Co-producers include Jozsef Cirko and John Engel.

Originally commissioned by Lucas, Black Angel was attached to screenings of The Empire Strikes Back in Europe and Australia.

Shot in the Scottish Highlands, the 25-minute short was produced for less than $40,000 (£25,000) in 1979.  After a brief time in theatres, all copies of the short were lost until an archivist at Universal Studios found a negative in December 2011.

The prints had wound up in the US following the collapse of UK studio Rank, which had stored the prints along with other film negatives in bunkers from the Second World War.

In October 2013, teams at several visual effects companies in San Francisco headed up by David Tanaka, Brice Parker and Jon Peters  restored the film frame by frame and Black Angel  had its world ‘re-premiere’ as the closing film of the Mill Valley fest in California.

It was also screened at the Glasgow Film Festival and re-released digitally early last year through iTunes. And after three weeks on YouTube, it has generated close to 400,000 views.

The feature adaptation is described as “an epic fantasy based on a Knight who undertakes a classic hero’s journey to fight the Black Angel, the Demon King’s commander in the lands of Serandal.

“Guided by the sorcerer Myrddin and aided by Princess Kyna, the daughter of a rival King, they take on an epic adventure to stop the darkness from taking over the lands and allowing the demon king to reign supreme.”

Christian said:  “I wrote Black Angel as an epic adventure inspired by the great Samurai films. For the feature film I want the audience to experience the intensity of the battles where life or death is the only prize.

“Like the first Star Wars and Alien, we are going for absolute reality, engaging the audience in the drama so they feel like they are really there in this ancient world, shot in staggeringly beautiful landscapes, ancient cities and castles.

“With flying demons and sorcerers, princesses and Knights, armies of the undead and an evil god of the underworld, we are filming down and dirty; ultimate realism that audiences hunger for and the world I am passionate to create on film again.”