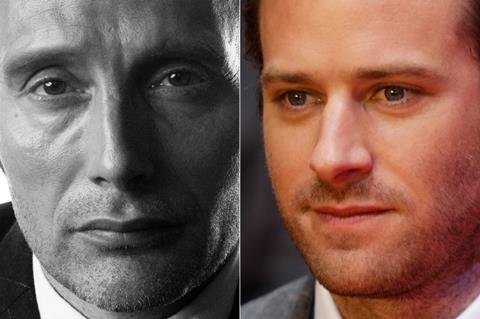 Mads Mikkelsen and Armie Hammer are to star in Amma Asante’s Cold War thriller The Billion Dollar Spy, on which HanWay Films will handle international sales and distribution.

HanWay will begin sales on the project at the AFM next month, while CAA Media Finance and Endeavor Content will oversee the US sale.

The long-gestating project saw production put on hold as a result of the coronavirus pandemic but is set to go into production next year in Eastern Europe.

Developed and produced by Walden Media, the film’s producers are Akiva Goldsman (A Beautiful Mind) and Greg Lessans through Weed Road Pictures. The script has been written by Benjamin August (Remember) from David E. Hoffman’s bestselling book The Billion Dollar Spy and is based on the true story of how one Soviet engineer and his CIA handler risked their lives to help bring an end to the Cold War.

Danish actor Mikkelsen, who will play Soviet engineer Adolf Tolkachev, is best known for roles in Casino Royale, The Hunt, TV series Hannibal and Thomas Vinterberg’s latest feature, Another Round.

Hammer, star of Call Me By Your Name and the upcoming Death On The Nile, will play CIA handler Brad Reid.

It marks the first feature from UK filmmaker Asante since Where Hands Touch in 2018. Her other credits include A United Kingdom and Belle, and she more recently directed episodes of Mrs America and The Handmaid’s Tale.