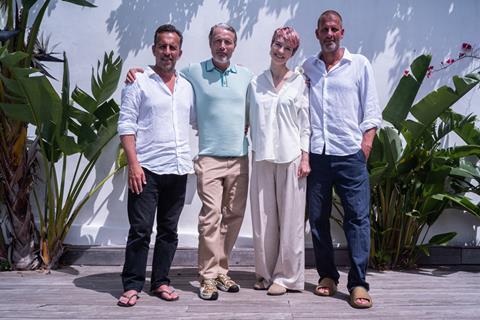 A Royal Affair director Nikolaj Arcel is to reunite with star Mads Mikkelsen on period drama King’s Land, on which TrustNordisk has boarded international sales.

The project marks Arcel’s first Danish film for nearly a decade and will be produced by Zentropa, which also made A Royal Affair that sold to 80 countries, won two prizes at the Berlinale in 2012 and went on to be Oscar nominated.

The project was announced today in Cannes and has already pre-sold to Germany (Koch Films), France (The Jokers Films), Benelux (September Films) and Hungary (Vertigo Media). A script is available for international buyers.

King’s Land begins shooting on September 5 and will film in Denmark, Germany and the Czech Republic. It has a budget of €8m ($8.5m), one of Zentropa’s biggest productions in years. The film is being readied for an autumn 2023 launch and will be released locally by Nordisk.

Louise Vesth, one of the heads of Zentropa and Lars von Trier’s long-time collaborator, is lead producer.

The film will also star Amanda Collin, most recently seen in the lead role of Ridley Scott’s sci-fi series Raised By Wolves for HBO Max.

The script has been written by Arcel alongside Anders Thomas Jensen, the writer and director of Mikkelsen action-drama Riders Of Justice. They have adapting it from Danish bestseller The Captain And Ann Barbara.

The story is set in the mid-1700s when Danish King Frederik V declared that the wild heath of Jutland should be tamed, cultivated, and colonized so that civilization could spread and new taxes be generated for the royal house. But nobody dared go to this brutal land until a lone soldier named Ludvig Kahlen stepped up.

Mikkelsen, most recently seen in Fantastic Beasts: The Secrets of Dumbledore after a star turn in Thomas Vinterberg’s Oscar-winner Another Round, said he was drawn to the story as well as the chance to reunite with Arcel after a decade.

Speaking in Cannes today, the Danish actor said: “I loved every second of working with him, I loved the result, I loved preparing. I go with the things that I like and that interest me, and if it’s family and old friends that’s an easy pick.

Discussing the upcoming feature, Mikkelsen added: “What’s so important about the heath in 1750? You want your kids to survive. You want the country to expand, you want to have a nation. As a country, as a nation, it was extremely important – to be a strong nation you needed to make sure that you could develop the land where you were living.”

Collin said she looked forward to a change of pace, going from the otherworldly Raised with Wolves to “heathen Jutland in 1758”. “Ann Barbara is a great character to explore as a female in her time, not accepting her place in society,” she added.

Director Arcel said he was drawn to the characters as well as the unique time period. “We can’t even understand how massive the obstacles were and how literally each day you would die of hunger,” he said.

“I think the modern part of it is that the characters have amazing journeys. This character’s massive drive and ambition almost goes beyond imagination. I can relate to some of these characters’ dreams. That’s timeless.”

Co-writer Thomas Jensen said he wrote the script with Mikkelsen in mind even before he was officially attached. “I love Mads as an actor, he’s the best,” he said. “It’s always a good story with a man who will die to obtain his goal. It has all the elements of a grand drama: love, death, fights, drama, even wolves.”

Producer Vesth noted the shoot will be split between Denmark’s Jutland, the Czech Republic and Germany (including a studio shoot) for about eight weeks, stating that attaching international partners will “raise the amount of experience needed when you have action, animals, big set ups, snow and rain.” She has been setting up the production for at least a year.

Rasmus Videbæk (A Royal Affair) will be cinematographer and the editor will be Oliviér Bugge Coutté (The Worst Person in the World).