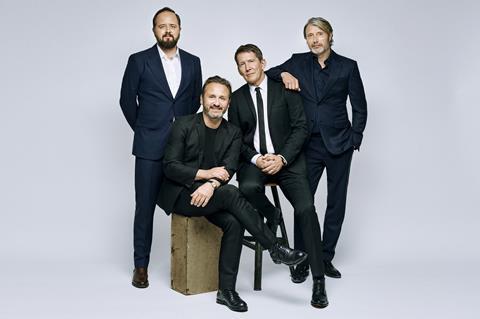 Thomas Vinterberg is reuniting with several key collaborators from his acclaimed 2012 drama The Hunt for new project Druk (the international title is yet to be confirmed) now shooting in Denmark.

The other major role in Druk is played by Magnus Millang, who has previously acted in Vinterberg’s Kursk (2018) and The Commune (2016). The cast also includes Maria Bonnevie and Helene Reingaard Neumann.

The Danish-language film, budgeted at $5m (Euros 4.5m), started shooting on May 1 and after a short break has now resumed and will continue until July. The film is shooting in Copenhagen, northern Zealand and in Västra Gotäland, Sweden.

The story follows a group of high school teachers, inspired by a theory that modest intoxication would open our minds to the world around us, embark on an experiment to uphold a constant level of intoxication throughout the workday. The experiment progresses for some but derails for others.

Vinterberg has been mulling over the idea for the film for several years and first spoke about it to Screen back in 2013.

Susan Wendt, managing director of TrustNordisk, added, “Druk has a captivating script with a highly relevant yet thought-provoking story that most people can relate to.”

Nordisk has Nordic rights and plans to release in Denmark in autumn 2020.