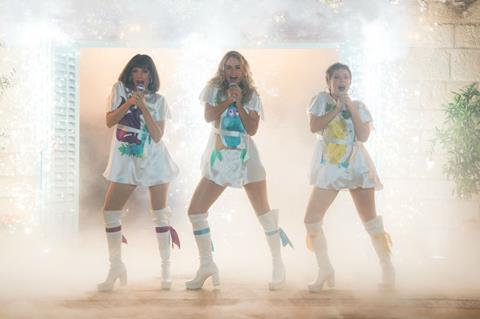 The original film took a massive £68.6m from its UK run in 2008 (still the country’s 11th highest-grossing title) and its sequel has a long way to go to match that total. While its opening marks a strong start, its takings are more likely to be front-loaded due to it being a sequel, and it will need to have serious legs over the course of the summer.

The film’s opening matches the Incredibles 2’s opening via Disney last week, and with this week’s overall top 10 not registering a single drop of 50% or more, the indicators are that the UK box office has recovered from a sluggish period.

This week, Universal occupies four of the top five spots in the chart, with Skyscraper sitting third after adding £892,723 in its second weekend, down 39%. The film is now up to £3.8m.

Hotel Artemis, the dystopian crime thriller starring Sterling K. Brown, Sofia Boutella and Jeff Goldblum and produced by The Night Manager outfit The Ink Factory, opened with £325,000 from 313 sites for an average of £1,038.

Thomas & Friends: Big World! Big Adventures!, the latest edition in the franchise based on the popular children’s comedy, opened with £125,081 this weekend.

Hindi romance Dhadak, from writer-director Shashank Khaitan, opened to £108,342 from 62 sites, placing it ninth in this weekend’s chart.

Animation Sherlock Gnomes was up 110% this weekend, boosted by a variety of family-friendly screenings. The film took £74,000 and is now on £8.8m.

Following a superb one-night opening on Tuesday of £203,593, feature documentary Spitfire, about the British military aircraft, held a few further screenings this weekend to take it to £211,464 so far. The one-night showing was the primary strategy for the film’s release, but encore screenings will take place at select venues over the coming weeks.

Jean-Stéphane Sauvaire’s Thailand-set boxing drama A Prayer Before Dawn opened this weekend with £19,161 from 19 sites, which with previews takes it to £26,296 to date. The film expands to 89 sites tonight (July 23) for a one-night screening, which will be followed by a live interview with the film’s real-life subject, Billy Moore, in conversation with rapper Professor Green, which Altitude will be hoping boosts takings.