Warner Bros’ adaptation falls only 20% as it climbs up two places to dethrone Universal’s Warcraft at number one. 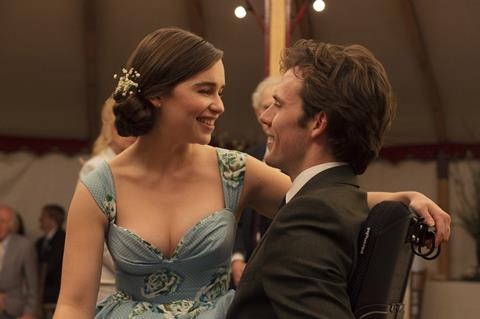 After missing out on the top spot last week due to Warcraft’s previews, Me Before You has taken over as the UK’s number one.

Jojo Moyes’ adaptation of her own novel will soon outgross all Nicholas Sparks’ adaptations in the UK. The film has been top of the UK market every day since Friday June 3, except for Thursday June 9.

The film is proving to be increasingly savvy counter-programming from Warner Bros and the continued Euro 2016 football tournament should help Me Before You.

Today [June 13], Warner Bros unleashes The Conjuring 2 at cinemas nationwide which will give the horror sequel a seven-day opening.

Last year’s June 12-14 release window was boosted by the monster arrival of Jurassic World but outside of that, this year’s period is actually stronger than 2015 across the rest of the top ten.

Of course, there are mitigating factors in that most distributors would have avoided releasing against Jurassic World, so the coming weeks will give a clearer picture of how much the football is affecting box office.

Huge drops this past Friday [June 10] of more than 60% for the majority of the top ten except for Me Before You suggest that there could be softer weekends ahead, especially across night-time showings.

Sony’s animation was up week-on-week over Sat-Sun and has now catapulted to a decent $13.5m (£9.5m) to date. It should hit the £10m mark at some point during this coming weekend.

Curzon Artificial Eye’s release of Whit Stillman’s biggest hit is now up to a superb $1.7m (£1.17m) after three weeks in play.

When Marnie Was There enjoyed the strongest debut for a Studio Ghibli film in the UK since Howl’s Moving Castle.

Studiocanal’s release of the reportedly final Ghibli animation grossed $144,000 (£101,476) from its 53 sites, ahead of the bows for Arrietty and The Tale Of Princess Kaguya, among others.

The Stanford Prison Experiment posted a UK bow of $2,600 (£1,830) from its limited one-per-day shows at four sites through Munro Films.

After showing it at Picturehouse Central on Friday night only, Picturehouse will be screening the film at seven sites on Wednesday [June 15], with other UK venues coming in from this Friday [June 17].

This week sees saturation releases for Warner Bros’ The Conjuring 2 (out today) and eOne’s Gods Of Egypt, while Curzon Artificial Eye’s Tale Of Tales receives a wide release.

Lionsgate’s The Keeping Room, Metrodome’s Bang Gang (A Modern Love Story) and Warner Bros’ Barbershop 3: A Fresh Cut are among the films receiving a limited release.