“#MeToo movement is as seismic as the Berlin Wall coming down,” says Jane Campion 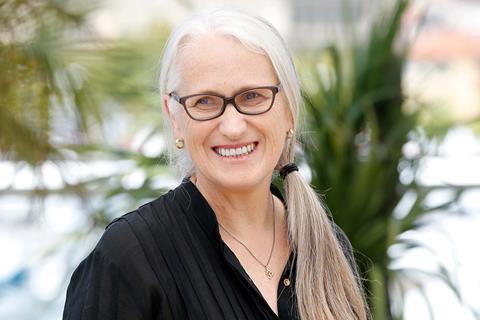 Jane Campion likened the ripple effect of the #MeToo movement to the changes after the Berlin Wall was finally pulled down at the press conference ahead of the world premiere for her new feature The Power Of The Dog in competition at the Venice Film Festival today.

“All I can say is that since MeToo happened, I have been watching a change in the weather that is absolutely substantial…it is like the Berlin Wall coming down,” said the softly-spoken New Zealand writer-director.

Campion name checked the female filmmakers who have won Oscars and major festival awards over the last 12 months, including Golden Lion winner Chloe Zhau and Palme d’Or winner Julie Ducournau. The latter is only the second woman ever to win the main prize at Cannes and the first to win it outright. Campion herself was awarded the prize ex-aqueo in 1993 for The Piano.

“To me, the girls are doing very well,” she said.

However, the veteran director also noted “statistics are not in the favour of women,” and that female filmmakers remain under-represented as a whole. “The great loss for everyone is that there is just not enough voice in the narrative describing who we are.”

The Power Of The Dog is Campion’s first feature since her John Keats biopic Bright Star in 2009. Since then she has been working on two series of the Sydney-set TV drama  Top Of The Lake, starring Elisabeth Moss.

Campion explained why she returned to the feature format. She was keen, she said, to embrace “the discipline and rigour” of the two-hour format after her “sojourn” in TV drama.

In own viewing habits on VoD platforms, she was turning more and more to features.

Campion also paid tribute to her backer Netflix, comparing the streamig company to Renaissance patrons like the Medici family.

“One of the great things about working with Netflix is that they did give filmmakers like me an opportunity to work with a budget I have not had a chance to work with before, to be able to express my vision,” she sais. “Fortunately, they value artistry. That’s a great thing.”

Campion is expecting Netlix to allow “a two or three week” theatrical corridor for The Power Of The Dog to screen in cinemas before it arrives on the Netflix platform. Even after it does go online, it will still be available in cinemas.

The film about two brothers on a ranch in 1920s Montana and the woman who comes between them is based on the novel by Thomas Savage, a book that she fell in love with. “It had a really powerful impact on me…generally, I hardly ever finish novels these days but this one I was very immersed in…slowly, I just kept taking steps toward finding out who had the rights.”

The score for the film was written by composer and Radiohead band member, Jonny Greenwood. As Campion revealed, they didn’t actually meet face to face. Greenwood was in the UK while she was working on the film in New Zealand. They still struck up a strong rapport. “He is a genius and when you see his emails, they are extraordinary. He is so enthusiastic…he is also so willing to explore any extra thing you might want to do.”

She talked of the “yearning” in Greenwood’s music and of his humility and work ethic. “He’s incredibly shy and I’m shy too. Now we can’t wait to meet each other. I think we’re going to meet in London,” she said.