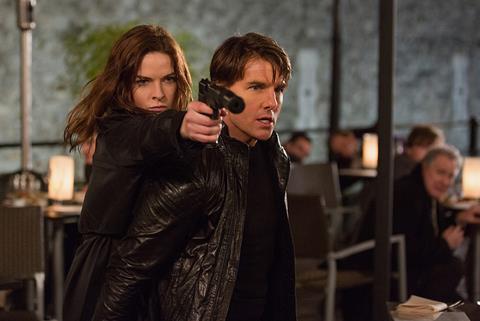 Paramount’s latest adventure for Ethan Hunt and the IMF scored an $8.36m (£5.35m) debut from its 570 sites, including $1.6m (£1.02m) in previews. It’s worth noting that even without its previews, Rogue Nation would have still landed in first place.

No Mission: Impossible film has yet hit the £20m mark in the UK, with Mission: Impossible’s $29.1m (£18.65m) currently the series’ highest grossing outing. Rogue Nation’s mission, should it choose to accept it, will be to capitalise on the strong start and change that.

Impacted by the good weather, Inside Out fell 52% in its second weekend with $5.6m (£3.57m), breaking its own industry record by playing in 621 sites.

However, Disney’s animation prospered midweek due to the summer school holidays and is up to an impressive $26.4m (£16.96m) after ten days in play, with the past seven days seeing it add almost £10m.

In terms of Pixar outings in the UK, Inside Out has overtaken both Cars films, with a trio of films in the £22m-£23m range (Brave, Toy Story and Wall-E) its next targets.

Southpaw held well as it followed up its strong opening with a $1.76m (£1.13m) second weekend.

Minions has become the second Universal release this year to hit £40m.

Minions will need to capitalise on the summer holidays over the coming weeks if it hopes to overtake Despicable Me 2’s $73.8m (£47.3m) result.

UK audiences were decidedly cold on Hot Pursuit on its opening weekend.

Playing in 107 sites in its fifth weekend, Amy will hit the £3m mark at the UK box office today [Aug 3].

Amy looks set to overtake Asif Kapadia’s previous documentary Senna ($4.95m/£3.17m) and could yet challenge March of the Penguins ($5.18m/£3.31m) as the second biggest non-concert feature documentary of all time.

Iris, Albert Maysles’ documentary of New York fashion icon Iris Apfel, posted a UK debut of $64,000 (£41,061), including previews, from its 24 sites through Dogwoof.

Vertigo’s The Diary of a Teenage Girl receives a wide release, while Warner Bros’ Max, Peccadillo Pictures’ 52 Tuesdays,Altitude’s Marshland and Curzon Film World’s Manglehorn are among the films receiving a limited release.