A website purporting to be the UK equivalent of controversial US cinema subscription service MoviePass is causing concern among the country’s exhibitors and distributors. 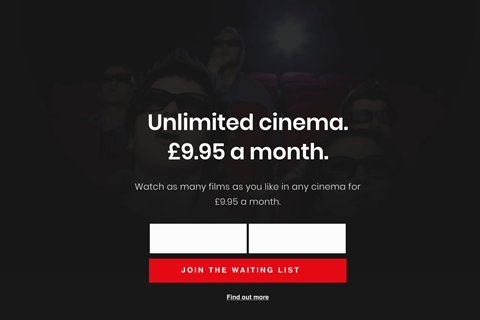 ‘cPass’, which appeared online yesterday (March 8), claims to be offering a subscription service for “as many films as you like in any cinema” at a cost of £9.95 a month. No further information is currently available, with visitors being encouraged to join a waiting list for updates.

In response, UK Cinema Association chief Phil Clapp issued a correspondence yesterday evening to the organisation’s members, obtained by Screen, in which he said that “cPass is in the recruitment phase, building a subscriber base without any actual offer”.

cPass lists the logos of companies including Vue, Odeon, Curzon, Cineworld and Reel Cinema on the website, suggesting involvement. Curzon and Vue, however, have confirmed to Screen that it has no association with cPass. Screen has reached out to the other companies and is waiting for confirmation of their involvement.

According to Clapp’s letter, the exhibitors listed are “exploring legal action to get their brands removed”.

The letter also states that a number of distributors have raised concerns, and that the UKCA is reaching out to the Film Distributors’ Association encouraging the latter to confirm that none of its members are involved in cPass.

No further information about cPass, including the company’s backers, is available. The company has a Twitter account, which emerged on January 10 this year and posted the following message:

“Hello Twitter! cPass is almost ready. The first cinema pass to watch one movie per day in any movie theater in UK and Europe for only £9.99 a month. Still in Beta!”

Founded in 2011, US-based cinema subscription service MoviePass offers subscribers one film per day for a fixed price of $9.95 per month. The company announced in February that it had recently surpassed two million subscribers.

It also launched a new division in January, MoviePass Ventures, to acquire and release movies with the help of a traditional distributor, picking up North American rights to American Animals at Sundance with The Orchard.