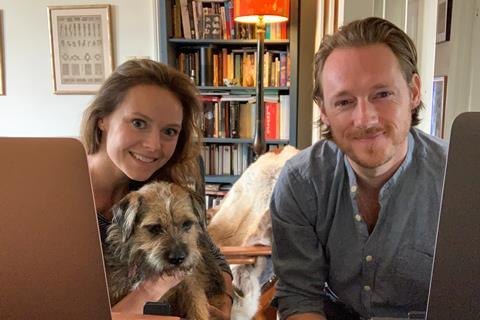 Matthew Butler-Hart and Tori Butler-Hart are the filmmakers and actors behind UK production company Fizz and Ginger Films, whose credits include the Victorian-era supernatural thriller The Isle.

When the husband-and-wife team found themselves in lockdown, they spent the first three weeks writing sci-fi feature Infinitum: Subject Unknown and spent much of May shooting at home and on location, with Tori taking the central role and co-stars Ian McKellen and Conleth Hill both filming their performances remotely.

How did Infinitum: Subject Unknown come about?
TBH: A few years ago, we wrote a sci-fi feature called Infinitum, which is now being turned into a graphic novel. It’s about an experiment using people as guinea pigs while they’re trapped in a time loop, reliving the same day over and over with no memory of how they got there. We wondered if we could make a companion piece to go with the bigger story and focus on one of those subjects.

MBH: Infinitum: Subject Unknown was written in the first few weeks of the lockdown and, as a lot of the story was already done, it came together quickly. The flat below us is empty so we used that for the first half of the film. The second half is set in a huge Jacobean abbey, which is also currently empty. When the government said that producers were allowed to film if done safely, we packed up everything and headed into the middle of nowhere.

How did you secure the rest of your cast?
MBH: When two of our long-time collaborators, Ian McKellen and Conleth Hill, heard what we were trying to achieve they said that they’d love to be involved. They’re filming their parts remotely, as if they’re being filmed for a TV interview about the research centre where their characters work There will be other actors involved, but they’ll all be part of a huge soundscape that will be part of the storytelling, so we’ll be adding more characters to our very small cast list.

What were the major challenges of production during lockdown?
MBH: We had people working remotely, including the editor Will Honeyball and Bill Honeyball on VFX, but the fact that it was just the two of us – with Tori in front of the camera most of the time – meant we had to do the work of an entire crew. We specifically wrote the script in a way that could work with the restrictions rather than having to continually compromise.

TBH: The first week or so was quite tough but we soon realised we were shooting way more than normal, partly because working with such a small camera and gimbal meant we could get shots that would have been impossible with a larger kit, but also because we could try things without having to move an entire crew.

Has working in lockdown given you any insights you might use going forward?
MBH: As horrible as the whole situation is, we have learnt so much about how we can move forward once this ends. We’d definitely want a bigger crew for the next film, but we have learned that we can achieve a lot by thinking differently about how films are put together and actually made.

What is the mood like in indie filmmaking right now?
MBH: It’s a real mixed bag. While there are plans to work with new social distancing measures in place, trying to get insurance that will cover Covid-19 will be impossible if nothing changes. Although the likes of Netflix can afford to put that kind of insurance in place, most of us indie folk cannot and it’s unlikely that investors will back something that may have to stop halfway through.

But people are also learning to adapt quickly and are trying to work out how to make things in a smaller, more concentrated way. Now that people can see that smaller productions might be the way forward, for now at least, I think they will get back to filmmaking quickly.

What have you been watching during this time?
TBH: We watched a lot of comedy shows like Community and Modern Family to try and balance the horrible news that was flooding in every day. But when we knew we were going to be making Infinitum, we watched a lot of sci-fi films for ‘research’.

What advice would you give to people in the business who are worried about the future?
MBH: We honestly think the independent world will never quite be the same again but mean that in the best possible way. It has needed shaking up for a while. If you think about what can actually be achieved, rather than what cannot, you’ll be in a good space to adapt quickly to the new world. Film will always survive, but the productions that will survive will be the ones that adapt. It’s absolutely possible and in many ways quite exciting.

What is the first thing you will do when the lockdown is lifted?
MBH: We should probably say visit people but it’ll probably be going to the cinema! We can just invite everyone to come along too.