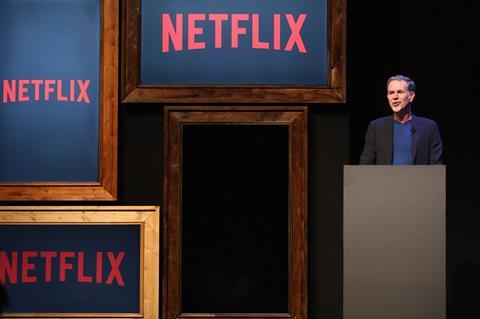 Netflix on Friday (April 6) declined to comment on a press report that it was mulling over a Cannes boycott in light of the festival’s ban on competition selections without French theatrical distribution.

According to a report in THR, the streaming giant is considering whether it should hold back its films that could potentially secure a world premiere berth out of competition on the Croisette.

The issue has bubbled to the fore in light of Thierry Fremaux’s comments last month about Cannes Film Festival’s stricter eligibility rules on competition selections, announced shortly before the 2017 festival when Netflix had Bong Joon-Ho’s Okja and Noah Baumbach’s The Meyerowitz Stories in competition.

The Cannes decree strikes at the heart of Netflix’s business model and bans competition selections without French theatrical distribution in place. It does not prevent Netflix or any other streaming service without a theatrical component from submitting films out of competition.

Among the Netflix titles that could be ready in time for next month’s festival include Orson Welles’ final film The Other Side Of The Wind, which was posthumously completed with Netflix funding; and Alaska-set thriller Hold The Dark from Jeremy Saulnier. Cannes unveils its official line-up next week on April 12.

Last year’s decree sparked a ripose at the time from Netflix CEO Reed Hastings (pictured), who said the establishment was “closing ranks” on the streaming service.

Okja and The Meyerowitz Stories stirred up controversy last year, although both went on to earn acclaim. Even before they premiered, the pair drew the ire of then competition jury president Pedro Almodovar who declared at the start of the festival that he could not conceive of a film without theatrical distribution winning the Palme d’Or.

At the same time, Netflix’s day-and-date streaming model fuelled ongoing tension with the French exhibition sector, whose adherence to local media chronology laws is a bone of contention with the streaming giant and blocks a film from debuting online until three years after its theatrical release.