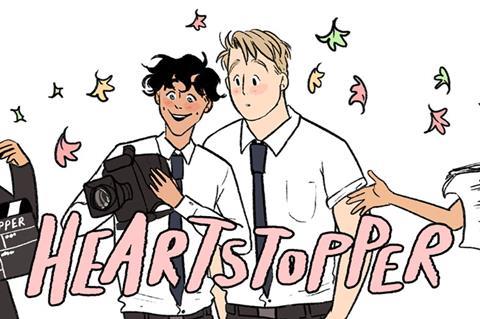 Netflix has greenlit a drama series based on Alice Oseman’s YA graphic novel Heartstopper, produced by See-Saw Films and directed by Euros Lyn.

Oseman has also written all eight half-hour episodes of the series, which centres on Charlie and Nick, who become friends at an all-boys school in Kent and quickly discover a romance blossoming between them.

It will mark the second series for Netflix made by See-Saw, which has feature credits including Ammonite and The Kings Speech, and previously produced The New Legends Of Monkey for the streaming giant.

Director Lyn, whose credits include episodes of Doctor Who and Sherlock as well as recent feature Dream Horse, will also executive produce the series alongside Patrick Walters, Jamie Laurenson, Hakan Kousetta, Iain Canning and Emile Sherman.

Originally launched as a web comic on Tumblr and Tapas in 2016, Oseman has since published three volumes of the Heartstopper series with the fourth volume set to publish this May by Hachette in the UK and Scholastic in the US, as well as 14 other territories worldwide. More than 250,000 copies have been sold in the English language.