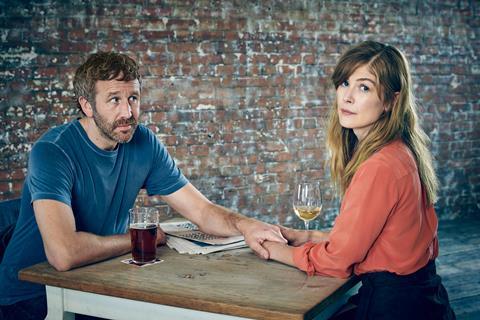 Chris O’Dowd and Rosamund Pike in ‘State Of The Union’

The second year of the Indie Episodic section at Sundance Film Festival brings world premieres of the Nick Hornby marriage therapy comedy State Of The Union directed by Stephen Frears and starring Rosamund Pike and Chris O’Dowd, and Kyra Sedgwick’s Girls Weekend, about a queer daughter who returns for a family gathering in Las Vegas.

Festival programmers have lined up 12 Episodic works, alongside four special events, among them Gregg Araki’s half-hour Starz comedy series Now Apocalypse about the misadventures of four friends in Los Angeles. Steven Soderbergh is among the executive producers.

All synopses provided by the festival. Entries hail from the US and are world premiere unless stated otherwise.

Past projects that have played in this category include I’m Poppy, Mr. Inbetween, and America To Me.

Delivery Girl
Director and screenwriter: Kate Krieger
Tricia is a woman struggling with her identity, living in a fiercely Catholic household leading a double life, selling drugs to make ends meet and carrying on an affair. She fights for the courage to embrace her future as the first of many delivery girls.
Cast: Kate Krieger, Adam LeFevre, Liz Larsen, Joe Holt.

The Dress Up Gang
Creators: Robb Boardman, Cory Loykasek, Donny Divanian
Executive Producers: Dave Kneebone, Tim Heidecker, Eric Wareheim
Donny, a responsible adult with the innocence and outlook of a child, relies on guidance and life advice from his friend Cory, the dad-like thirtysomething who has been crashing on his couch for quite some time.
Cast: Donny Divanian, Cory Loykasek, Frankie Quinones, Andie MacDowell, Christian Duguay, Brent Weinbach.

Girls Weekend
Director: Kyra Sedgwick
Creator: Ali Liebegott
When a queer daughter returns home to Las Vegas for a “girls weekend” with her estranged homophobic sister and people-pleasing mother, her gun-toting dad lets it slip that her mother’s cancer is back with a vengeance, forcing her to decide whether or not she can rejoin her family.
Cast: Ali Liebegott, Linda Lavin, Amy Landecker, Ken Jenkens.

State Of The Union (UK, pictured)
Creator: Nick Hornby
Director: Stephen Frears
Producer: Amy Jackson
Executive Producers: Jamie Laurenson, Hakan Kousetta, Iain Canning, Emile Sherman, Nick Hornby, Stephen Frears.
Every week before their weekly marital therapy session, estranged couple Tom and Louise meet at a pub to try and get their story straight for the therapist. With each successive episode we piece together how their lives were, what drew them together and what has started to pull them apart.
Cast: Rosamund Pike, Chris O’Dowd.

Wu-Tang Clan: Of Mics And Men
Director: Sacha Jenkins
Executive Producers: Peter J Scalettar, Peter Bittenbender, Chris Gary
The cultural history of Wu-Tang Clan; artists who escape the poverty, violence, and oppression of their neighborhoods through music. They encounter wild success and heartbreak along the way to becoming the most recognized musical movement in the world – all while walking the tightrope that links business with brotherhood.
Cast: All members of the Wu-Tang Clan.

Work In Progress
Creators and screenwriters: Abby McEnany, Tim Mason
After her therapist dies mid-session and she begins to date a trans man, Abby is forced to re-evaluate her life choices, her dating options and whether or not to confront the woman responsible for ‘ruining her life’: SNL’s Julia Sweeney.
Cast: Abby McEnany, Theo Germaine, Karin Anglin, Celeste Pechous, Julia Sweeney, Alison Gates.

Past projects that have played in this category include Wild Wild Country, Top Of The Lake, O.J.: Made In America, and The Jinx: The Life And Deaths Of Robert Durst.

Untitled Amy Berg Documentary
Director: Amy Berg, Producers: Amy Berg, Paul McGuire, Ruchi Mital, Joy Gorman Wettels
While the 2016 election catalysed the Women’s March and a new era of feminist activism, Tamika Mallory and Erika Andiola have been fighting for their communities for decades. Their stories expose the fundamental connection between personal and political and raise the question: what’s intersectionality and can it save the world?

For the full line-up of the 73 shorts, visit the official website.

Mike Plante, senior programmer, added: “This year’s crop of shorts are rowdy, reflective, visionary – we are excited to discover so many new voices and perspectives on today’s world.”