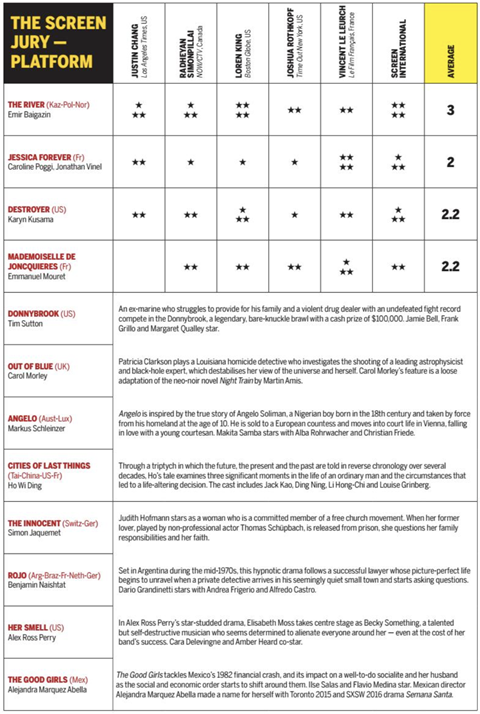 Radheyan Simonpillai of NOW/CTV, Boston Globe’s Loren King and Time Out New York’s Joshua Rothkopf all gave it one star for ‘poor’, while Vincent Le Leurch of Le Film Français and Screen’s own critic both awarded a top score 4 for ‘excellent’.

The film presents a dystopian world where violent misfits reign supreme. A band of rehabilitated marauders, led by Jessica (Aomi Muyock), launch the fight for peace.

Karyn Kusama’s Destroyer picked up a 2.2 average, with 3s from King and Le Leurch but a 1 from Rothkopf. It stars Nicole Kidman as an LAPD detective who must face her personal and professional demons when a new case uncovers traumas from a past undercover operation.

Emmanuel Mouret’s Mademoiselle De Joncquières also picked up 2.2 (with one score to come), taking a 2 (‘average’) from all critics apart from Le Leurch, who gave a 3 (‘good’).

It features an embittered woman (Cécile de France) who takes revenge on her promiscuous lover by throwing him into the arms of Mademoiselle De Joncquières (Alice Isaaz), a young lady with a chequered past.

The River still leads the way with an average of 3.

Tim Sutton’s Donnybrook starring Jamie Bell and Carol Morley’s Out Of Blue with Patricia Clarkson are the next titles lined up for this year’s grid.

Read more: Toronto interview - Carol Morley on her police drama Out Of Blue